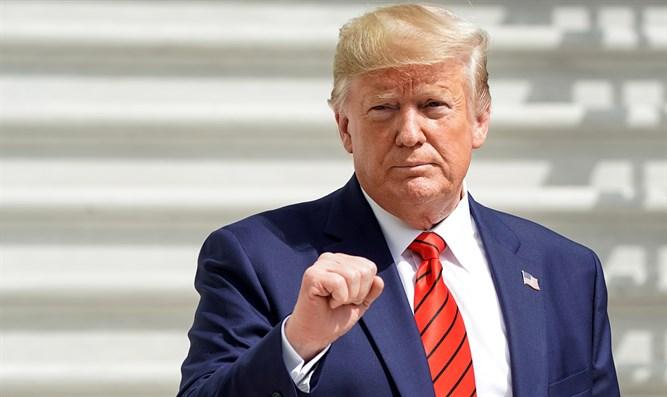 Trump defends decision to pull troops from northern Syria, but stresses US is not abandoning the local Kurds.

US President Donald Trump on Tuesday defended his decision to pull troops from northern Syria, thus permitting Turkey freedom of action against the Kurds in the area.

At the same time, Trump in a series of tweets also stressed that the US is not abandoning the Kurdish population in northern Syria, which Turkey views as a terrorist organization which is aligned with the PKK movement which has been outlawed by Ankara.

“So many people conveniently forget that Turkey is a big trading partner of the United States, in fact they make the structural steel frame for our F-35 Fighter Jet. They have also been good to deal with, helping me to save many lives at Idlib Province, and returning, in very good health, at my request, Pastor Brunson, who had many years of a long prison term remaining. Also remember, and importantly, that Turkey is an important member in good standing of NATO. He is coming to the U.S. as my guest on November 13th. #ENDENDLESSWARS,” tweeted Trump.

He later wrote in a second tweet, “We may be in the process of leaving Syria, but in no way have we Abandoned the Kurds, who are special people and wonderful fighters. Likewise our relationship with Turkey, a NATO and Trading partner, has been very good. Turkey already has a large Kurdish population and fully understands that while we only had 50 soldiers remaining in that section of Syria, and they have been removed, any unforced or unnecessary fighting by Turkey will be devastating to their economy and to their very fragile currency. We are helping the Kurds financially/weapons!”

The White House announced late Sunday night that the US will pull back its forces from parts of northern Syria, opening the door for a major operation by the Turkish military in Syrian territory.

Trump on Monday defended his administration’s plans to withdraw US forces from northern Syria and permit Turkey to operate in the area, signaling that America’s role in Syria may be coming to an end.

He later made clear, however, that the US would not allow Turkey to do anything inhumane in Syria.

“If they do anything outside what we think inhumane…they could suffer the wrath of an extremely decimated economy,” Trump told reporters during the signing of a trade agreement with Japan.

“We’re going to be watching Turkey,” he added. “I told President Erdogan that it’s going to be your responsibility. If any of our people get hurt, big trouble.”

Trump’s move was criticized by prominent Republicans, including Senate Majority Leader Mitch McConnell, who argued the withdrawal from Syria would only benefit Russia, Iran, and the Assad regime”.

Similarly, Senator Lindsey Graham (R-SC) expressed opposition to Trump’s sudden decision to pull back US troops from northern Syria, warning such a move would be a “nightmare for Israel”.

(Arutz Sheva’s North American desk is keeping you updated until the start of Yom Kippur in New York. The time posted automatically on all Arutz Sheva articles, however, is Israeli time.)