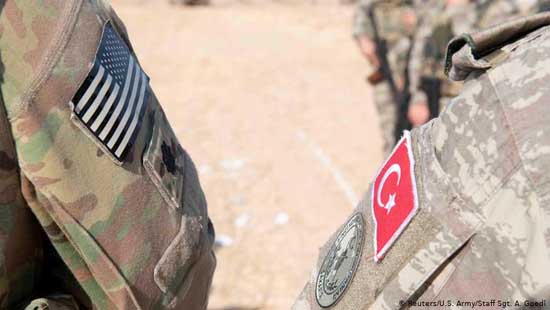 While the US leaves a vacuum as it washes its hands of its Syrian Kurdish allies, the major players in Syria’s Astana peace process —Iran, Russia, and Turkey — step up to take their share.

Russia, Iran, the Syrian regime and ISIS all stand to gain in Syria after US President Donald Trump’s confused announcement of a US withdrawal from the country’s north, paving the way for a long-threatened Turkish invasion.

While Trump has previously back-tracked on a similar surprise announcement, a small number of US troops along the northern border pulled out on Tuesday, leaving it unclear how deep Turkey intends to push into the space left in their absence.

Turkey wants to expel the largely Kurdish Syrian Democratic Forces (SDF), which it views as a domestic threat, while carving out a “safe zone” for the return of millions of Syrian refugees.

How Moscow, Tehran and Damascus react will be telling, in what appears to have been a coordinated quid pro quo between Turkey and the key members of the Astana process — a Syrian peace initiative driven by Russia and Iran, who back Syrian President Bashar al-Assad’s regime.

Syria’s Kurds are now faced with a weaker hand in negotiations for an alliance with Assad in order to repel Turkey.

Two previous attempts at dialogue have fallen flat, but there are signs Damascus may be able to bring the autonomously controlled SDF areas back into its orbit in return for military support.

SDF Commander-in-Chief, Mazlum Abdi, reportedly reached out suggesting a partnership on Tuesday, while Syrian deputy foreign minister al Makdad appeared to offer dialogue on Damascus’ terms, warning them not to plunge themselves “into hell.”

Salih Muslim, a spokesman for the SDF-allied, Kurdish Democratic Union Party, told DW that the SDF would be open to dialogue if the Syrian regime promised to protect the area’s autonomous system of governance. “This system should be part of a united Syria,” Muslim said. “If they accept such a solution they will have a dialogue. But I think the Syrian regime is not free to do such a thing by themselves without Iran and Russia.”

The US drawdown has opened up conditions for Moscow to entrench its position as power broker in an eventual Syrian peace by delivering Idlib in the country’s west to Assad’s forces.

As a key military partner to Syrian regime forces, Russia has been frustrated by Turkey’s inability to disarm the jihadist rebels Hayat Tahrir al-Sham (HTS) in Idlib. But the apparent quid pro quo with Turkey means many rebels will be drawn to a new front opened up by a Turkish invasion in the east.

This would enable Russia to give Assad a green light to regain key territory in one of the final fronts of the eight-year war.

While former US envoy to the global anti-Islamic State coalition, Brett McGurk, described Trump’s decision as a “gift to Russia, Iran and ISIS,” Salih Muslim feared Kurdish Syria may be overrun by those militant Salafists from Idlib.

Turkey is “going to bring all those jihadis closer to this area and possibly establish a kind of territory that just belongs to those Salafis,” Salih Muslim said. “Turkey was happy before when they were on the border and they were trading with them and getting oil from them. Maybe Turkey’s going to establish a new caliphate.”

The SDF will also have to contend with the approximately 70,000 Islamic State fighters and detainees in camps under its control, at a moment when it will be concentrating its forces on a battle with Turkey to its north.

Salih Muslim questioned Trump’s statement that Turkey will now take responsibility for those detained. “IS members were supported by Turkey, even armed by them and sent into Syria. So how can they become responsible for them? They are going to reorganize them and use them as blackmail against Europe.”

Iran will also gain, in a situation where any US withdrawal from the region allows it to expand its regional influence. The vacuum left by a US pull-out enables Tehran to entrench its forces in Syria amid a proxy war with Israel.

That prospect may antagonize Israel, who has flown hundreds of sorties into Syria with the stated aim of knocking out Iranian installations and supply lines. It may also embolden Israel to extend its own ‘safe zone’ in Syria’s south as a buffer against Iran and its Lebanese ally Hezbollah.

But even as Syrian Kurds’ enemies gain ground and their erstwhile allies withdraw, Salih Muslim is defiant: “We will resist to the end. We have no other choice.”