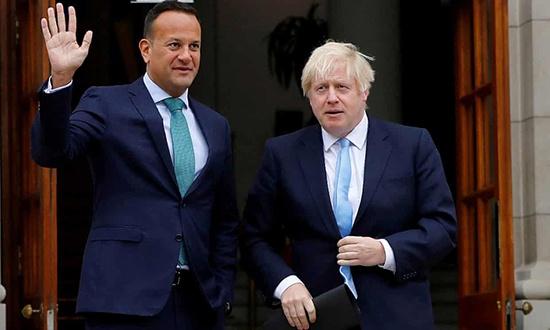 Boris Johnson is set for a private meeting with the Irish taoiseach on Thursday in a last-ditch attempt to come to a Brexit compromise over Northern Ireland, after talks came to a sudden halt in Brussels.

Johnson and Leo Varadkar have opted to meet on “neutral” territory in the north-west of England rather than Dublin or London, as negotiations enter a make-or-break phase ahead of next week’s EU summit.

Varadkar said on Wednesday he was willing to examine how the people of Northern Ireland could give their consent to arrangements to avoid a hard border.

Downing Street banned media from attending the talks and refused to disclose where they were taking place.

No 10 was insisting on Wednesday that the prospect of a deal is still possible, with plans being made to let parliament sit on a Saturday for the first time since the Falklands war to vote on any possible deal that emerges out of the EU summit on 19 October.

However, talks between British and EU officials in Brussels have come to a standstill. Michel Barnier, the EU’s chief negotiator, told the European parliament: “We’re not really in a position where we’re able to find an agreement.”

After rejecting the imposition of a customs border on the island of Ireland, and the plans for Stormont to have a veto on Northern Ireland’s alignment with the EU’s single market in goods, Barnier said: “The proposal of the British government as things stand isn’t something we can accept. It replaces an operational, practical, legal solution [with] one that is simply a temporary solution.”

Downing Street has declined to say how it will react if Johnson does not get a deal at the EU summit, as it insists it will not request a delay to Brexit required by the Benn act. But Andrea Leadsom, the business secretary, told ITV’s Peston that Johnson suggested it would be “absolutely” reasonable to send a separate message to the EU undermining any official request for an extension to article 50.

“It’s quite clear that the government’s policy is that we do not want a delay. I don’t think anybody can be in any doubt about that. So I think it’s perfectly reasonable to make that point very clearly.” Asked if it meant saying that to the EU, she replied: “Absolutely.”

Barnier also suggested Johnson needed to rein in the Downing Street aide responsible for accusing the German chancellor, Angela Merkel, of making a deal almost impossible by demanding that Northern Ireland stays in a customs union.

“In this moment, where we are now, we will remain calm, we will remain constructive and we will be respectful of the UK and those who lead it,” Barnier said. “That is our approach and we hope that with this attitude on both sides we will be able to come to an agreement that works for everyone.”

Guy Verhofstadt, the European parliament’s Brexit coordinator, said he would not be as “diplomatic” as the bloc’s negotiator. “I think that the proposal that Boris Johnson one week ago put forward was not serious at all,” he said. “I call it a virtual proposal, not a real proposal.”

The European commission’s president, Jean-Claude Juncker, told MEPs: “We are not accepting this blame game which started in London. We are not to be blamed but we will see in the next coming days how things will develop.”

Verhofstadt most clearly expressed the anger felt by many at the briefings from Downing Street, in which it was claimed that the EU was “willing to torpedo the Good Friday agreement”. Merkel was said in the anonymous briefing to have also refused to allow Northern Ireland to leave the bloc’s customs union.

“The only one who is not to be blamed is Mr Johnson apparently. All those who are not playing his game are traitors, are collaborators, are surrenderers.

“The real traitor is he or she who risks bringing disaster on his country, its economy and its citizens by pushing Britain out of the European Union. That in my opinion is a traitor.”

The Brexit secretary, Stephen Barclay, will meet Barnier for a working lunch in Brussels on Friday. But the focus is now on Johnson’s planned meeting with Varadkar at around the same time.

EU diplomats for the 27 other member states were briefed by the European commission on Wednesday morning that there had not been any change in the UK position in recent days to give hope that a deal could be signed off by leaders when they meet next Thursday.

According to EU sources, the French representative in the meeting warned in response that “there can be no assumptions” about a free-trade deal with the UK after Brexit, given the British wish to remove all level playing field conditions, such as non-regression on environmental standards, from the withdrawal agreement.

In a forceful intervention, the point was made that free-trade agreements were always decided on a case-by-case basis with the final result not automatically certain.

Johnson’s government has promised a “best-in-class” deal with the EU and wants to end the UK’s close alignment with the bloc on standards regarding health, environment and workers’ rights.