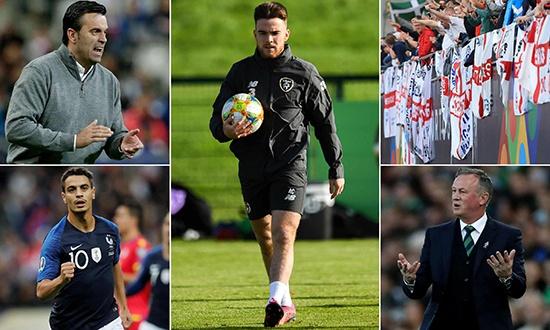 Prague steels itself for England’s fans, Ireland may have a new hero in Aaron Connolly and Scotland are desperate to find goals

1) All eyes on fans in Prague

In what looks certain to resemble the world’s most unedifying stag party, an estimated 6,000 England fans will descend on Prague to watch Gareth Southgate’s team take on the Czech Republic. Unsurprisingly designated as a “high risk” fixture, this Friday night game will attract no shortage of thirsty visitors to the Czech capital, hellbent on making a weekend of it in a city renowned for the cheapness of its beer and myriad other nocturnal delights. Scheduled to kick off at 8.45pm local time, when more patriotic fans will have had all day to occupy the city’s Old Town Square, get liquored up and perform their traditional repertoire of ditties, it is difficult to imagine the local constabulary will be kept idle following Uefa’s refusal to move the game to a more suitable day or time. While many England fans are perfectly well-behaved, anti-social behaviour of the kind seen in Amsterdam and Porto on recent excursions seems dismally inevitable. “You’re part of our team, make the country proud,” said Gareth Southgate, in the FA’s attempt to get in front of the problem by releasing a video entitled Don’t Be That Idiot. Somebody will almost certainly be that idiot and, if recent history tells us anything, they are unlikely to be alone. BG

2) Is Connolly the solution to Ireland’s scoring problems?

Mick McCarthy’s second coming as Republic of Ireland manager got going in earnest in March when his team played with impressive vibrancy at home to Georgia, though they only won 1-0. Goals, you see, remain extremely hard to come by for Ireland. But a solution may have emerged: Brighton’s Aaron Connolly, fresh from scoring twice against Spurs last weekend, could make his senior international debut in Tblisi on Saturday. If he shows the same sharpness that he did against Tottenham, then Ireland could take a big step towards Euro 2020 qualification, and young Connolly will be hearing more of that ‘new Robbie Keane’ talk. PD

Anything less than a haul of four points from games at Slovakia and at home against Croatia over the coming days is likely to end any chance Wales have of qualifying for Euro 2020, although they could still be thrown a lifeline via the Nations League. Suffering from discomfort to his adductor, Aaron Ramsey, arguably a more important player for the Welsh than even Gareth Bale, is out of the Slovakia game. Ryan Giggs could be forced into a tactical change and the thinking by Danny Gabbidon and Iwan Roberts on Elis James’s Feast Of Football podcast was that Giggs needs to avoid playing the brand of expansive football he prefers in charge of making his team more difficult to beat. With this in mind, playing five at the back with two midfielders sitting directly in front of them was mooted as a potential solution. Whatever Giggs decides, a very talented generation of Welsh players is in danger of being wasted and the results of the next two games could have a major say in the future of a young manager who has been far from convincing during his tenure so far. BG

Darlings of the last European Championship, Iceland need to pull out some big results if they are to reach Euro 2020. They are third in Group H, behind an exciting young Turkey team and France, who thrashed them 4-0 earlier in the group. On Friday they host Les Bleus, who will be without the injured Paul Pogba and Kylian Mbappé but still have no shortage of options. Didier Deschamps could, for instance, use Mbappé’s absence to give Wissam Ben Yedder his most meaningful cap to date. The striker, who joined Monaco in the summer and has been as prolific there as he was at all his previous clubs, has had to wait a long time for international recognition but, at 29, he is still young enough and good enough to make an impact. He would boost his chances of appearing in an international tournament if he helps France beat Iceland on Friday and Turkey three days later. PD

5) Another toothless performance from Scotland?

While Scotland’s rugby players scored 61 without reply against Russia at the Rugby World Cup, their footballing counterparts would gladly settle for victory by a far slimmer margin when they are entertained in Moscow on Thursday. Scotland trail Russia, who are second in Group I behind Belgium, by nine points with four games remaining and their hopes of qualifying via any other route than the play-off place they earned through the Nations League have evaporated. In Ryan Fraser, John McGinn, Andy Robertson, Scott McTominay and John Fleck Scotland have decent players, but their inability to score goals remains aconcern. The six forward players picked by Steve Clarke squad have just eight international goals between them and urgently need to improve that tally ahead of those play-offs so many Scottish hopes are pinned on. BG

Second behind Germany in a group that also contains the Netherlands, Northern Ireland’s remaining fixtures in Group C could scarcely be more difficult. Following their trip to Amsterdam they travel to the Czech Republic for a friendly, before completing their qualifiers against the Dutch at home and Germany away in November. Michael O’Neill will have to make do without Norwich left-back Jamal Lewis, who has pulled out with a knee injury, but the manager remains upbeat about his team’s chances of doing enough in successive qualifiers against the Netherlands to not have to concern himself with a potential route to the finals through the Nations League play-offs. “We are in a double-header with Holland and I believe if we get four points we will qualify,” he said. Having made his first international start in defeat against Germany last time out, Linfield striker Shayne Lavery could be the manplaying up front faced with a defence marshalled by Virgil van Dijk, as O’Neill has hinted the 20-year-old’s pace and intelligence could be a key weapon in a battle against one of the world’s best defenders. BG

7) Switzerland need to find the right side of late dramas

Switzerland could have already secured their qualification for Euro 2020, instead they are set for a tense finale in Group D: and they have not coped well with tense finales so far. In their first match, at home to Denmark, they blew a three-goal lead in the last six minutes; and in their last outing, in the Republic of Ireland, they looked comfortable before conceding an 85th-minute equaliser and hanging on for a point. They face those two countries again in the next few days, starting with a trip to Copenhagen on Saturday. Xherdan Shaqiri has chosen to remain in international exile but manager Vladimir Petkovic has recalled Stephan Lichtsteiner after omitting him for the trip to Dublin. Apparently he values the 35-year-old’s experience. “He is still our captain and leader,” said Petkovic of the Augsburg defender, without saying whether Lichtsteiner will actually play. PD

Finland have never qualified for a major tournament. It’s somewhat of an annoyance for a nation of over five million people who gave football the supremely talented Jari Litmanen. Even tiny Iceland have beaten them to the punch. But having assumed a strong position in Group J – they’re second behind Italy – they will never have a better chance of enjoying a summer party themselves. Markku Kanerva’s side have won four and lost two (both to Italy) but now it’s crunch time. They face Bosnia-Herzegovina and Armenia next, the two teams directly below them. They travel to the Bilino Polje Stadium in Bosnia-Herzegovina on Saturday. With Norwich’s in-form Teemu Pukki leading the line, Kanerva’s compact system is well set up to pick off their inconsistent opponents on the break. Finland have not conceded a goal against any team except Italy and Pukki has been just as lethal in qualifying as he has in the Premier League, scoring five in his last six. If he can continue his hot streak over the next few days, Finland’s long wait for some summer fun could soon be over. GB

9) Can Hungary capitalise against inconsistent Croatia?

Going into their game against Slovakia last time out, Hungary were pretty much two wins from Euro 2020. Now, after a 2-1 loss, qualification from Group E looks unlikely. Hungary did beat a sluggish Croatia in Budapest in their previous group encounter, and looked impressive in doing so. But with Hungary distinctly lacking in individual quality, it’s the sum of their parts that makes this Hungarian apparatus tick. And when two or three of those parts falter, the whole machine malfunctions, as evidenced against Slovakia. Things don’t look like changing in Croatia either, with very few of Hungary’s key men finding any kind of form at club level this season. Yet Hungary are an odd side full of players unheard of in western Europe, but who are prone to big performances in big games. Croatia are massive favourites, but Hungary have refound a quality of turning up when it matters most under Italian coach Marco Rossi. And with Croatia looking decidedly inconsistent since the World Cup, maybe this isn’t as improbable as first thought. TM

Andorra have played 55 European Championship qualifiers and lost 55 European Championship qualifiers. It’s not pretty but maybe, just maybe, the tiny principality (population 76,965) could end that ugly losing streak against Moldova at home. Their visitors are the one nation that have a worse defensive record than them, having shipped 17 goals in six Group H qualifiers to Andorra’s 14. Moldova have managed to win once, 1-0 at home against Andorra, but if ever there was a chance for Koldo Álvarez to take a point – or even three – in a Euro qualifier, it is at the Estadi Nacional on Friday night. It would help if they could score a goal, mind. They haven’t managed that in six Euro 2020 qualifiers but even a 0-0 draw would be enough to make history. GB