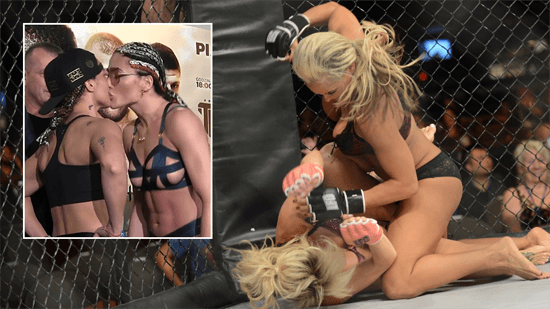 The ‘Lingerie Fighting Championship’ (LFC) is interested in acquiring world champion boxer Ewa Brodnicka after she kissed her opponent at a weigh in while wearing Victoria Secret underwear, prompting a slapping fight.

WBO world super featherweight champion Brodnicka arrived at the weigh in for her fight with Edith Soledad Matthysse wearing a skimpy Victoria Secret number consisting of straps that just about covered her 119 lbs figure when she tipped the scales a day before her defense last Friday in her native Poland.

During the traditional stare down, Brodnicka gave the Argentine challenger the eyeball before planting a playful kiss on the lips, provoking laughter from those present. However, Matthysse thought the stunt was no laughing matter and quickly slapped the smile off Brodnicka’s face with a shot in the smacker.

The two engaged in a slapping match before being restrained by members of their respective camps, but the incident had already hit the headlines. Brodnicka had perhaps anticipated her head-turning outfit would grab the bulk of the press attention, but it didn’t exactly go unnoticed.

Lingerie Fighting Championship, an MMA promotion whose fighters exclusively wear underwear and lingerie during bouts, has since expressed interest in acquiring Brodnicka to fight under their hybrid brand of combat sports.

“Brodnicka would be an awesome addition to LFC,” promotion CEO Shaun Donnelly, whose organization prides itself on featuring “some of the sexiest women in the world fighting in MMA”, told RT Sport.

As an athlete who loves to shock a crowd, fighting in lingerie might be tempting for Brodnicka and she certainly showed she’s adept at scrapping in saucy underwear after her spat on the scales with Matthysse, but it’s unlikely she will give up her world title to take to the cage.

In the ring, Brodnicka and Matthysse fought out a tame ten-round split decision points win for Brodnicka, which angered Matthysse even further and the contender flipped the middle finger at the victorious champ, hinting she thought the home fighter had benefited by some home cooking.

The controversy didn’t end there; Brodnicka blasted a local Polish sports site who, not entirely unfairly, reported that her weigh in kiss was “more entertaining” than the fight itself. The fighter branded the article as “sexist”.

Should Brodnicka wish to continue her career as a bra-clad brawler and make the switch to lingerie fighting, such articles will certainly become more of a rarity.