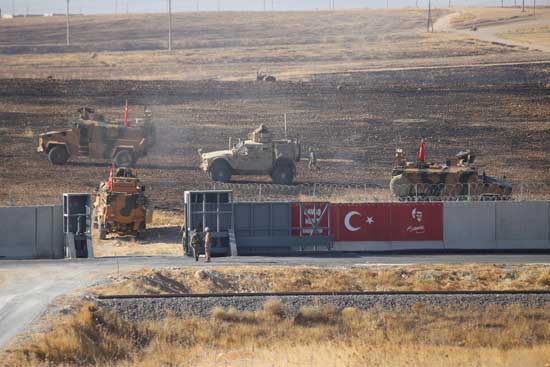 The operation began on Wednesday to eliminate what Turkish President Tayyip Erdogan called a “terror corridor” on Turkey’s southern border with Syria.

Turkey told the United Nations Security Council on Wednesday that its military operation in northern Syria would be “proportionate, measured and responsible” ahead of a closed-door meeting of the 15-member body to discuss Ankara’s offensive.

The operation began on Wednesday to eliminate what Turkish President Tayyip Erdogan called a “terror corridor” on Turkey’s southern border with Syria, just days after an abrupt decision by U.S. President Donald Trump to move U.S. troops from the area who had been allies of the Kurds fighting Islamic State.

Turkey says the Kurdish YPG, the main component of the U.S.-backed Syrian Democratic Forces, is a terrorist group linked to Kurdish insurgents that have fought in Turkey for years.

The U.N. Security Council will meet on Thursday to discuss the situation in Syria at the request of the body’s five European members, Britain, France, Germany, Belgium and Poland.

“As has been the case in its previous counter-terrorism operations, Turkey’s response will be proportionate, measured and responsible,” Turkey’s U.N. Ambassador Feridun Sinirlioglu wrote in a letter to the council seen by Reuters.

“The operation will only target terrorists and their hideouts, shelters, emplacements, weapons vehicles and equipment,” he wrote. “All precautions are taken to avoid collateral damage to the civilian population.”

Turkey justified its action under Article 51 of the U.N. Charter, which covers an individual or collective right to self-defense against armed attack.

Guterres called for the protection of civilians and civilian infrastructure and Haq said Guterres “believes that there’s no military solution to the Syrian conflict.”