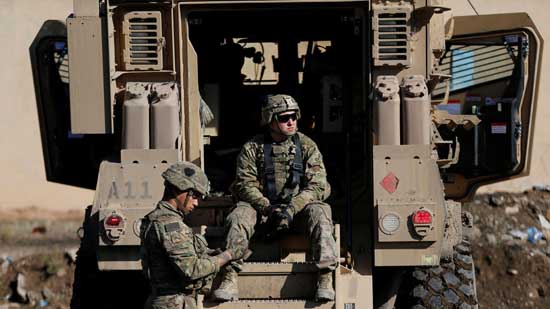 President Donald Trump has denounced America’s decades of war in the Middle East – Iraq in particular – as one big mistake based on a ruse, saying openly once again that Saddam had no WMDS at the time of the invasion.

Trump once again took to Twitter to revive the anti-war rhetoric of his 2016 election campaign, in another attempt to defend his recent decision to withdraw troops from northeastern Syria. The move sparked an uproar among Trump’s critics, who have accused him of betraying the US-backed Kurdish militia in the area which is now about to face a Turkish offensive.

While yet again reminding his followers that Washington has wasted $8 trillion on wars in the Middle East, this time Trump’s laments went beyond the foolishly spent “trillions” of dollars.

“We went to war under a false & now disproven premise, weapons of mass destruction. There were none!” Trump tweeted. This revelation is hardly surprising at this point, but what is surprising is to hear it put so bluntly from the president himself.

Former President George W. Bush, the man who dragged America into this quagmire in the first place, blamed it on faulty intelligence, while also regretting not finding the weapons of mass destruction. His successor Barack Obama, who used to portray himself as an opponent of the war in Iraq, never directly questioned the reasons for the invasion.

“Thousands” of American soldiers died or were wounded in the conflict, which took millions of lives “on the other side,” Trump said – and he’s not that far from the truth this time.

The war, which started in 2003 with the US invasion of Iraq and lasted for almost a decade up to 2011, cost the US almost 4,500 lives, according to various estimates. About half a million Iraqis died over the same period, in war and occupation. Some estimates put the figure at more than a million.

Now, more than a decade and a half later, an American president admits that “going into the Middle East is the worst decision ever made in the history of our country!”

This mistake also proved to be a costly one. Although the president did not disclose the sources of his ever-increasing assessment of the US expenditure on its Middle Eastern war efforts (last time, he said it was $ 7 billion), other reports suggest America spent a hefty sum waging wars in the region – and dealing with their consequences.

According to a report prepared by the Congressional Research Service back in 2014, the cost of the US war on terror had amounted to at least $1.6 trillion up to that point. Later, a 2016 Brown University study put the costs of US wars in Iraq, Afghanistan, Pakistan and Syria at about $3.6 trillion over the period between 2001 and 2016, adding that they would likely reach $4.79 trillion by the end of 2017.

A 2013 Harvard University working paper said that the cost of just two US wars – Iraq and Afghanistan – could eventually amount to between $4 and 6 trillion, including the cost associated with long-term medical care and disability compensation for service members, veterans and families, military replenishment, and social and economic expenses.

In July 2018, a US government watchdog revealed that more than $ 15 billion was wasted on futile reconstruction projects in Afghanistan alone, where America wages another seemingly everlasting conflict. The US invaded Afghanistan in 2001, following the devastating 9/11 attack, and attempted to remove the Taliban from power. Almost two decades later, it has failed to defeat the group.