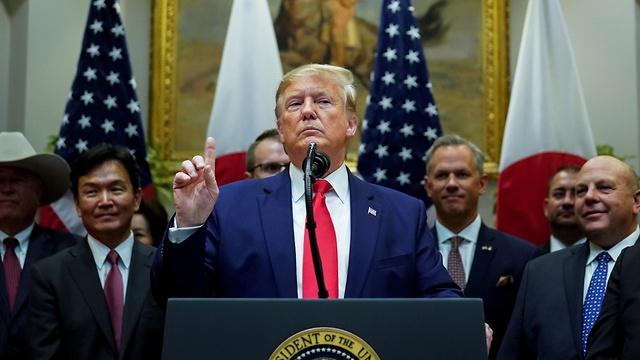 Analysis: The president’s decision to withdraw U.S. troops from Kurdish areas in Syria, in addition to the diminishing American presence in the rest of the Mideast, raises fears not only about Iran – which will step up its activity in the region – but about the U.S.-Israel relations as well

For the past three years, Prime Minister Benjamin Netanyahu has bet heavily on President Donald Trump and been rewarded with major diplomatic gains in exchange for his warm embrace of the U.S. leader.

But the U.S. pullback from northeastern Syria, essentially abandoning its Kurdish allies, has called that strategy – and Trump’s reliability as a friend – into question. In particular, there are growing fears that Israel’s archenemy Iran could be emboldened by what appears to be an increasingly hands-off American policy in the region.

“The Israelis had thought of Trump as a special U.S. leader very much in tune with their view of the region,” said Dan Shapiro, who was former U.S. President Barack Obama’s ambassador to Israel. “Now they’re coming to terms with the cold hard reality that his isolationist instincts and his chaotic, impulsive decision making can actually be very damaging to their interests.”

It is a surprising turn of events for Netanyahu, who has been one of Trump’s strongest supporters on the international stage.

That alliance yielded a wealth of dividends for Netanyahu during the first few years of the Trump administration – perhaps none so striking as Trump’s decision to break with decades of U.S. policy and recognize Jerusalem as Israel’s capital. He moved the American Embassy to the contested holy city, enraging the Palestinians.

Trump also withdrew from the international nuclear deal with Iran – an agreement that Israel had derided as weak and ineffective. He defended Israel from its many critics at the United Nations, and, early this year, recognized Israel’s annexation of the Golan Heights, captured from Syria in the 1967 Mideast war.

Netanyahu routinely boasts that Trump is the best friend that Israel has ever had in the White House. But things have begun to change since he failed to win reelection in April and was forced to hold a second, inconclusive vote last month.

During the first campaign for the April race, Trump embraced Netanyahu’s candidacy and made little secret of his support, inviting the Israeli leader to the White House when he announced his recognition of the Golan Heights annexation.

But during the do-over race, Trump kept his distance. And after Netanyahu last month failed for a second time to win a parliamentary majority in national elections, Trump appeared to play down the friendship. “Our relations are with Israel, so we’ll see what happens,” he said.

Concerns have only deepened following a series of moves in which Trump backed away from possible military confrontations. In June, he called off a planned attack against Iran in response to the shooting down of an American drone. Trump also decided against military action in response to an alleged Iranian attack on Saudi oil facilities last month, saying he did not want war.

Then, this week, he abruptly withdrew U.S. troops from Kurdish areas in northeastern Syria, clearing the way for a Turkish invasion aimed at crushing the Kurds, America’s allies in the fight against the Islamic State group. Trump has defended the move by saying the United States should not be “fighting and policing” in the Middle East. But it reportedly caught Israeli officials off guard.

The fear is that Trump’s actions, or lack thereof, could encourage Iran to step up what Israel sees as aggressive and hostile activity in Syria, Lebanon and Iraq.

“The main image is a very weak U.S. that does not help its allies. It deserts its allies,” said Eytan Gilboa, an expert on U.S.-Israel relations at Israel’s Bar-Ilan University.

Israeli officials declined to comment about Trump’s decision in northern Syria but said relations with the U.S. remain strong and the country is more than capable of defending itself.

“We will always remember and implement the basic rule that has guided us: Israel will defend itself, by itself, against any threat,” Netanyahu said at a memorial ceremony Thursday for soldiers killed in the 1973 Mideast war. “The Israeli military is prepared to preempt any threat, defensively and offensively, with crushing strength.”

But while officials have stopped short of openly criticizing Trump, the American pullback from Syria has pushed some to question Netanyahu’s close alliance. That support has had the effect of alienating some of Israel’s traditional backers in the Democratic Party and the overwhelmingly liberal Jewish American community and caused friction with allies in Europe.

Ofer Shelach, a lawmaker with the Blue and White Party, the main rival of Netanyahu’s Likud party, said the events in northeastern Syria are “more evidence of Benjamin Netanyahu’s ongoing diplomatic failure.” He said that despite the close ties with Netanyahu, Trump does “what suits him.”

But not everyone views the U.S. move as necessarily bad for Israel – or all that new. Yaakov Amidror, Netanyahu’s former national security adviser, said Trump’s disengagement in many ways continues Obama’s reluctance to become embroiled in yet another Mideast conflict.

Although a U.S. exit from the region could have “very bad consequences” in terms of Iranian actions, he said it also could create new opportunities. Not having to worry about the “sensitivities” of U.S. troops in the area could give Israel more freedom to act, he said.

“The space is more opened to not just the Iranians but to us,” he said.