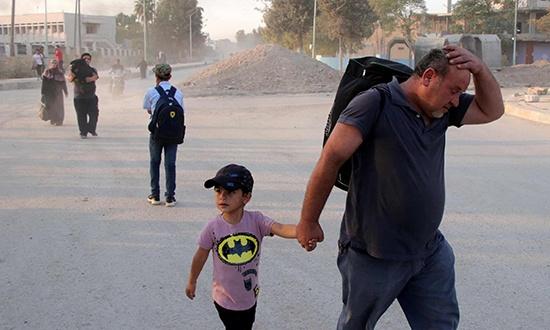 As they seek safety away from Turkish shells, Syrian Kurds burn with anger at Donald Trump’s betrayal

Waiting at a roadside depot, Hussein Rammo, a stooped elderly Kurd, his eyes wet with tears, had the look of a broken man. “Betrayal leaves the bitterest taste,” he said, his voice at a whisper as he discussed Donald Trump’s decision to abandon Syria’s Kurds.

“I am 63 years old and I have never seen anything like this. Before there was regime oppression and now we are getting betrayal. This is worse.”

Shells fired by Turkish forces thudded in the distance as Rammo shuffled towards an arriving minibus, along with several dozen other Kurds jostling for seats. Like thousands of others, they were desperate to flee Qamishli, and make their way to anywhere far away from the feared Turkish onslaught.

Two days into the Turkish offensive against the Kurds in north-east Syria, the region’s biggest city is shuttered and empty. Fighters and those yet to flee make up the few people left on the streets. The bus depot along a rubbish-strewn road is one of the few gathering points left in a city now at war.

Rahima Osman, 52, was waiting with her two grandsons, 12 and three, to catch a ride to Hassakah, a two-hour drive to the south. “My sons have all fought for this cause,” she said, of the Kurds’ partnership with the US to fight the Islamic State terror group. “Two of them died as martyrs.”

Pointing at the youngest boy, Osman said: “This little lad was three months old when his father was martyred. His name is Farhan Lezin. I am taking them to a safe house, as far away from here as I can.”

Anger and confusion rippled through the crowd. “You’re mocking us by being here,” said one man, before he squeezed inside the closing door of a departing bus. Nizamuddin Ibrahim’s anger was more visceral. “After giving 5,000 martyrs, this is how they respond to our sacrifice,” the 41-year-old construction worker shouted. “We are poor people, we have nothing to do with this.”

Then came a family from Kobane, a town at the heart of Syrian Kurdish life long before the war. Kobane was almost completely destroyed in the fighting against Isis, and was again under attack on Thursday. “Many people are leaving town,” said Ismael Muslim Ahmed, standing next to his pregnant wife and clutching their infant son. “I’d say around 40% of the people in Kobane have gone already.

“I was in Aleppo and my house got destroyed, when I got back to Kobane, that house was destroyed too. I’m expecting it to happen a third time. The shelling has been intense.”

Ahmed said hundreds more fleeing Kobane had opted to drive south to the French-built Lafarge cement plant near Raqqa, from where the remnants of the US forces in the region are yet to depart. Some Kobane refugees have made their way to the base demanding that the US protect them, even as the country’s commander-in-chief continues to justify his decision to order troops home.

Full to the brim, the buses formed convoys along the long road to the Iraqi border, passing flatbed trucks, carrying dozens more people. They passed farmlands, scorched by the summer’s intense heat, from where Kurdish forces fired mortars into nearby Turkey on Thursday afternoon. Shells flew across both sides of the border throughout the day, with the heaviest barrages landing in the town of Ras al-Ayn, where the Turkish operation was launched late on Wednesday.

Nearby, a Kurdish officer who called himself Lt Muzloom, was resting in a house with a dozen or so troops. “Yes we fired at the Turks, after they fired at us,” he said. “What else should we do?”

The 29-year-old officer claimed that Trump and the Turkish president, Recep Tayyip Erdoğan, bore equal responsibility for causing the military operation. Aid groups departed north-east Syria en masse on Thursday, before what they expect to be an expanded Turkish operation that many warn will spark a new humanitarian crisis in the region. The Red Cross has called for assurances that civilians be allowed safe passage through the combat areas.

“All zones should be safe for civilians and anyone else not directly taking part in the fighting. That’s a basic tenet of international humanitarian law,” said Fabrizio Carboni, the ICRC regional director for the Near and Middle East.

“They each feed off the other, said Muzloom, of the Turkish and US leaders. “The Americans were helping us when we were fighting Isis, and all the while they knew the Turks were turning a blind eye to them.

Two large detention centres holding tens of thousands of accused Isis members and their families are within several hours’ drive of Muzloom’s makeshift base. He had fought in battles against Isis across the region since the US struck a partnership with Kurdish leaders to take on the terror group. Fears that Kurds may be stretched in battle and less able to control the camps were unfounded, he claimed. “We have reserves, and we have volunteers coming, so we are not worried about that.”

He claimed that Ankara was attempting to drive divisions between Arabs and Kurds, who have long coexisted in north-east Syria. Erdoğan has said he wants Syrian Arab refugees in Turkey sent back across the border for settlement in new “safe zones”, to be carved out by Turkey’s military operation.

“We don’t have a problem with the Arabs,” said Muzloom. “The Turks want to open a gap between us. We can’t allow that to happen.”