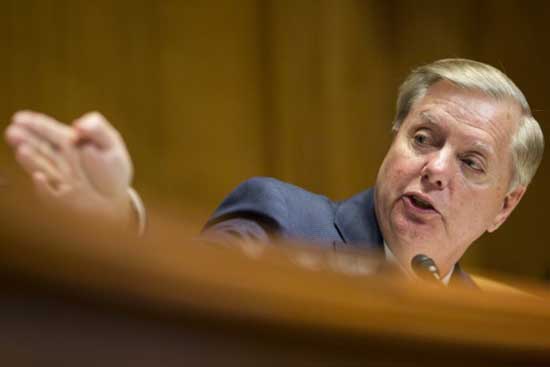 US Senators Lindsey Graham and Chris Van Hollen on Wednesday announced that they have reached an agreement on new sanctions against Turkey after the country launched a military operation in northern Syria, The Hill reported.

“I am pleased to have reached a bipartisan agreement with Senator @ChrisVanHollen on severe sanctions against Turkey for their invasion of Syria,” Graham said in a tweet announcing the deal.

He added that “while the Administration refuses to act against Turkey, I expect strong bipartisan support. … Most Members of Congress believe it would be wrong to abandon the Kurds who have been strong allies against ISIS.”

The deal between the two senators comes after they announced Monday that they were working on sanctions legislation following Trump’s decision to yank US troops out of northern Syria ahead of a planned Turkish military operation.

Turkey began airstrikes and shelling against Kurdish forces in northern Syria on Wednesday and, hours later, moved ground troops into the country after Trump pulled back US troops.

Congress is currently out of town as part of a two-week recess. But Van Hollen said on Wednesday that they will introduce the legislation next week and want a quick vote.

“This sanctions bill will be introduced as soon as Congress returns. Will ask for an immediate vote to send a clear message to Turkey that it must cease and desist its military action, withdraw its fighters from the areas under attack, and stop the tragic loss of life,” he said.

The bill, according to a fact sheet shared by Graham, would sanction any assets of Turkish leadership, including Turkish President Recep Tayyip Erdoğan, within US jurisdiction.

The bill would also target Turkey’s energy sector and military, including sanctions against “any foreign person who sells or provides financial, material, or technological support or knowingly does a transaction with Turkish military.”

It would also prohibit US military sales to Turkey and restrict the ability for Turkey’s leadership to travel to the United States.

“Today @LindseyGrahamSC and I are announcing a framework for sanctions against Turkey to respond to their military operation in northeastern Syria, which is already underway. These sanctions will have immediate, far-reaching consequences for Erdogan and his military,” Van Hollen tweeted.

Trump is facing fierce backlash from both sides of the aisle for his decision to pull US troops out of northern Syria. Lawmakers warn that it could bolster the Islamic State in Iraq and the Levant (ISIL) and endanger the Kurds, who have allied with the United States to fight the terrorist organization.

Under the bill, sanctions against Turkey would remain in effect until the administration certifies to lawmakers that Ankara has withdrawn its forces from Syria.

Trump distanced himself from Turkey’s military operation earlier Wednesday and indicated that he would support additional sanctions.

“I think Lindsey would like to stay there for the next 200 years and maybe add a couple a hundred of thousand people every place, but I disagree with Lindsey on that,” Trump told reporters at the White House.

“But I will tell you that I do agree on sanctions, but I actually think much tougher than sanctions if [Erdoğan] doesn’t do it in as humane a way as possible.”