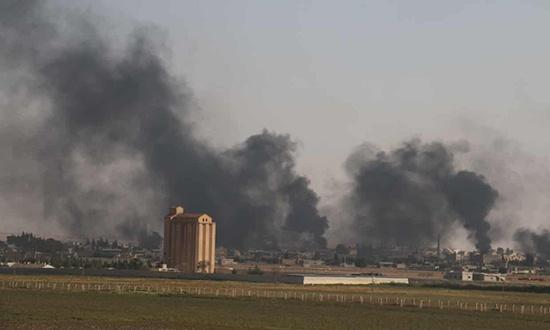 Smoke rises above the Syrian town of Tel Abyad after the Turkish military entered the area. Photograph: Anadolu Agency/Anadolu Agency via Getty Images

Michael Safi in Amman, Bethan McKernan in Istanbul and Julian Borger in Washington

The US has set down red lines for the Turkish offensive into Syria that would trigger sanctions against Ankara, including “ethnic cleansing” and indiscriminate fire directed at civilians.

On Thursday, a senior US official also condemned the Turkish invasion on Thursday, saying “it endangers our allies in the fight against terror … and then thirdly, it creates tremendous insecurity for the entire region”.

According to multiple reports, the civilian death toll was rising on the second day of the Turkish invasion, as a result of shelling of residential areas along the Turkish-Syrian border. It was unclear what the US threshold would be for imposing sanctions given the mixed signals Donald Trump and his administration had sent over the past few days.

The comments followed a threat by Turkish president Recep Tayyip Erdoğan to “open the gates” for Syrian refugees in his country to migrate to Europe if the continent’s leaders label Turkey’s military campaign in north-eastern Syria an “occupation”.

He warned EU states he would “open the gates and send 3.6 million refugees your way” during a combative speech at a meeting of lawmakers from his Justice and Development (AK) party on Thursday afternoon.

The US official said a joint security mechanism worked out by the US and Turkey, involving a demilitarised zone and joint patrols, had been working well but that Erdoğan had abruptly rejected it in a telephone conversation on Sunday with Donald Trump.

“We thought that this was a good compromise outcome,” the senior official said. “But on Sunday, President Erdoğan told President Trump that he was not satisfied with it. And he said that he would go off on his own and do what the Turks had always said was their maximalist position, that is – to push out 30 kilometres.”

“Within that zone, Turkey alone would be responsible for security and various other things,” the official said adding that the plan laid out by Erdoğan included moving up to 4 million Syrian refugees currently living in Turkey back to their homeland.

The official insisted Trump had not given the offensive a “green light”, and said the US had refused any kind of military support for the Turkish offensive.

“The United States will not give any military support that was asked by the Turks at various levels at various times, including in the call on Sunday,” the official said.

The official also spelled out what Turkish actions would trigger US sanctions.

“That would include ethnic cleansing. It would include in particular indiscriminate artillery, air and other fire directed at civilian population,” the official said. “That is what we’re looking at right now. We have not seen significant examples of that so far.”

However, the tone of the US official, who was speaking on the understanding he would not be named, was in marked contrast to the president, who has sought to mitigate Turkish actions by arguing Turks and Kurds had been fighting for centuries, and, bizarrely, that the Kurds had not helped the US in the second world war, at the Normandy landings.

The UN security council failed to agree on a common stand on the Turkish incursion on Thursday. European countries issued a joint statement calling for an immediate halt to the offensive. The US circulated talking points that were more mildly critical, but the Russian mission wanted language included condemning the “illegal occupation” of Syria, that would apply to the US and allied presence alongside the Kurds in north-eastern Syria. The talks broke down without agreement.

Earlier, Erdoğan rebuked critics of the operation in Saudi Arabia and Egypt and said Isis fighters who were captured in the military campaign would be imprisoned in Turkey if their home countries refused to claim them.

As he spoke, Turkish soldiers and their allies were clashing with the Kurdish-dominated Syrian Democratic Forces (SDF) in several border towns during the second day of an offensive that has caused tens of thousands of civilians to flee their homes.

There was heavy back-and-forth shelling as the SDF clashed with Turkish forces on the outskirts of the towns of Tel Abyad and Ras al-Ayn. By evening, Turkish forces had managed to surround both towns, a spokesperson for the Turkish-allied Free Syrian Army said. The claim was partly denied by the SDF, who said the main road in Ras al-Ayn remained open despite heavy bombing.

There were also reports of mortar exchanges in Qamishli, another large town, and unconfirmed claims of civilian deaths and injuries across the border region that Turkey hopes to clear of SDF forces.

At least 23 SDF fighters and eight civilians, two them SDF administrators, were killed, according to the Syrian Observatory for Human Rights. The SDF said three of its fighters had been killed, while six fighters with Turkey-backed rebel groups had also been killed. Erdoğan earlier claimed his forces had killed 109 Kurdish fighters.

The Kurdish Red Crescent, a humanitarian group, said on Thursday night that 11 civilians had been killed so far in the fighting including an 11-year-old boy in Qamishli. Hospitals in both Ras al-Ayn and Tel Abyad were out of service, it added.

In an apparent attempt by Kurdish-led forces to retaliate, mortar fire from Syria killed three people including a child in the Turkish border town of Akçakale, hospital and security sources told Reuters.

On the Turkish side of the border, after initially welcoming the operation’s start on Wednesday, civilians began fleeing in the face of SDF counter-attacks, hurriedly grabbing belongings and bundling children into cars.

Turkish troops crossed the border into north-east Syria on Wednesday evening after an earlier barrage of airstrikes and artillery signalled the beginning of a long-planned operation to establish the buffer zone. The Turkish military later said it had hit 181 “militant targets”.

Video footage showed civilians fleeing towns with columns of smoke rising in the background and jet trails visible in the sky.

Gülnur Aybet, one of the Turkish president’s senior advisers, told CNN: “President Trump and President Erdoğan have reached an understanding over precisely what this operation is.” Aybet added that Trump “knows what the scope of this operation is”.

Late on Thursday, Trump tweeted: “We have one of three choices: Send in thousands of troops and win Militarily, hit Turkey very hard Financially and with Sanctions, or mediate a deal between Turkey and the Kurds!”