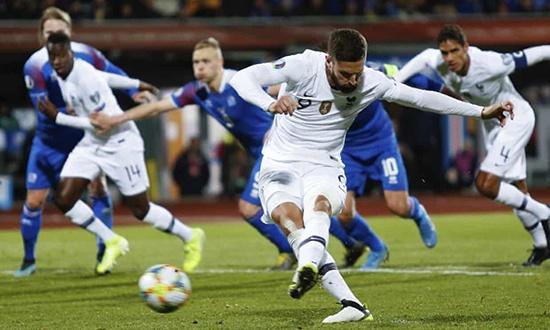 Olivier Giroud scored the only goal from the penalty spot as world champions France claimed a 1-0 victory in their crunch Euro 2020 qualifier in Iceland, though there was concern for Chelsea as N’Golo Kanté missed the game after picking up an injury in the warm-up.

The Chelsea striker tucked home in the 66th minute of the Group H clash in Reykjavik after Antoine Griezmann had been kicked by Ari Skulason. “It was a very tough game but we ground through and Olivier’s goal did the job,” said Griezmann.

The coach Didier Deschamps added: “We had several chances to add to our goal and it would have been nice because they are dangerous on set pieces.”

The result ensured France kept pace with Turkey, who beat Albania 1-0 thanks to a 90th minute Cenk Tosun strike, at the top of the group while third-placed Iceland were cut six points adrift of the leaders.

In the other game in Group H, Andorra picked up their first ever points in European Championship qualifying with a 1-0 win over Moldova. Marc Vales scored the only goal of the game midway through the second half.

European champions Portugal and Ukraine edged closer to qualification with comfortable home wins in Group B.

Ukraine sank Lithuania 2-0 to stay top of the group on 16 points from six games, followed by Portugal who are on 11 points from five matches after beating Luxembourg 3-0 with Cristiano Ronaldo among the scorers.

Portugal, who visit Ukraine on Monday, missed a string of chances to win by a bigger margin. Anthony Moris produced a string of fine saves to keep the score respectable after Bernardo Silva pounced on a loose ball and steered it past two defenders on the line to fire the home side ahead in the 16th minute.

Poor finishing coupled with Moris’s heroics kept Portugal at bay before Ronaldo scored his 94th international goal to reach the 699 mark at senior level and Gonçalo Guedes sealed the win with an 89th-minute effort.

Ukraine, who will qualify for Euro 2020 if they avoid defeat against Portugal on Monday, overpowered Lithuania thanks to a double from Ruslan Malinovskiy.

The midfielder broke the deadlock with a crisp left-footed shot after a one-two with Júnior Moraes and made it 2-0 with a brilliant free kick around the wall into the far corner.