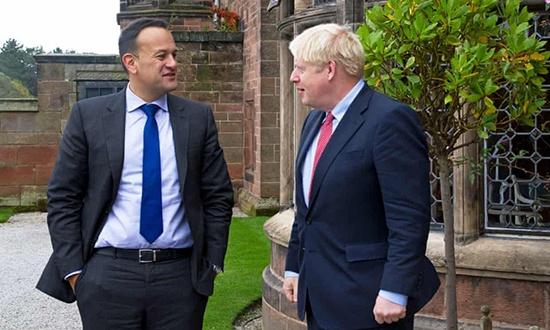 Boris Johnson has signalled that he will make a last-ditch U-turn on his plans for the Irish border, setting up 48 hours of intense negotiations that will make or break a Brexit deal.

On a day of rapid movement in talks, EU sources said the prime minister had conceded that there could not be a customs border on the island of Ireland – a critical step away from his previous position.

That came after European ambassadors prompted tentative hope of a deal by giving the green light for what some diplomats described as a “tunnel” discussion in which a small team of negotiators meet for intensive talks to find a break-through moment. The Democratic Unionist party and European Research Group (ERG), a group of rightwing Conservatives, later issued statements promising flexibility, keeping hope alive that Johnson could find support for a new offer in the House of Commons.

But amid ongoing scepticism that a deal could be forced through in the short time left and with Angela Merkel due to hold talks with Emmanuel Macron on Sunday night, the prime minister faces a frantic race to push through his fresh proposals with Brussels or at home.

“The UK has accepted that there is not a deal that involves a border on the island of Ireland – that is a big break from what they were saying,” one EU source said. “Now the key is for them to lay out how their new position over the weekend.”

On Friday, Johnson twice refused to deny that Northern Ireland could still stay in the EU’s customs territory after Brexit when asked by reporters on Friday.

“I think it would be wrong of me to give a running commentary on the negotiations,” he said. “With the greatest possible respect I think, look at everything I’ve said previously. I think you can draw your own conclusions from that. But let our negotiators get on.”

Johnson added: “I can certainly tell you that under no circumstances will we see anything that damages the ability of the whole of the United Kingdom to take full advantage of Brexit, and I think that’s what people would expect, and that’s what I think we can achieve.”

During a briefing of EU ambassadors on Friday, Michel Barnier did not go into the detail of the UK’s new position. But he informed the diplomats that his two-hour breakfast with the Brexit secretary, Stephen Barclay, had been notable for the apparent pivot by the British government.

Following a meeting in the Wirral on Thursday, Johnson and Leo Varadkar, the Irish taoiseach, had agreed that they could see a “pathway” to a deal.

One option the EU might accept is a scaled-down version of the customs partnership proposed by Theresa May in 2017.

Under the plan, Northern Ireland would leave the EU customs union but the UK would agree to enforce the bloc’s customs rules and tariffs on goods moving from Britain to Northern Ireland. There would be a rebate system to compensate businesses impacted.

But EU sources suggested that there would not be sufficient time to work out the detail for the UK to leave on 31 October. “You don’t reinvent the wheel in five days,” said one senior diplomat. “We are still looking at an extension.”

EU sources said Johnson had suggested to them that the DUP could be convinced by his recast vision for the border.

The leader of the party, Arlene Foster, said on Friday her party of 10 MPs admitted “the need to be flexible and look at Northern Ireland specific solutions” in a statement.

Steve Baker, a former Brexit minister and chair of the ERG, said he and other members can “glimpse the possibility of this being a tolerable deal, however they want to see the wording of any agreement and expect a full briefing from No 10.

The ERG has around 30 MPs in its group who consistently blocked May’s Brexit deal and are seen as a vital cohort to win over for Johnson to succeed.

“We are all warmly disposed to backing a tolerable deal but until we have got a text we can’t say what we are going to do,” Baker told the Guardian.

“I’ve been very, very, clear that the whole of the UK should leave the EU together. I’m not going to do anything until I can read the text of the agreement.”

In EU capitals there remains considerable doubt that there is a viable solution in the pipeline that could be signed off by leaders at an EU summit next Thursday. A European commission spokesman formally announced the intensification of talks, as first revealed by the Guardian, in a statement reasserting its unmoved position.

“The EU and the UK have agreed to intensify discussions over the coming days,” the commission’s statement said. “The EU’s position remains the same: there must be a legally operative solution in the withdrawal agreement that avoids a hard border on the island of Ireland, protects the all-island economy and the Good Friday (Belfast) agreement in all its dimensions, and safeguards the integrity of the single market.”

EU diplomats said “ideas” and “elements” had been raised by Barclay that would “allow the negotiation teams to continue their efforts in search of a positive outcome”.

Brexit is like climbing a mountain, says Michel Barnier – video

Earlier in the day, the European council president, Donald Tusk, said he had set the prime minister an ultimatum of presenting new Brexit proposals by Friday or “no more chances”. He cautiously welcomed Wednesday’s developments in Wirral.

Tusk warned, however, that “time was practically up” and there was “no guarantee” of success.

“Johnson promised the EU to come forward with a solution that would work for all,” he said. “A solution that would not only satisfy the hardcore Brexiters but also solve our well-known and legitimate objectives: to avoid a hard border on the island of Ireland, to protect the Good Friday agreement, and ensure the integrity of the single market.

“Unfortunately we are still in a situation in which the UK has not come forward with a workable realistic proposal.”

Tusk said he told Johnson a week ago that “if there were no such proposals by today I would announce publicly that there are no more chances – because of objective reasons – for a deal for the incoming European council”.

“However, yesterday, when the Irish taoiseach and the UK prime minister met they both saw for the first time a pathway to a deal. I have received promising signals from the taoiseach that a deal is still possible.”

Tusk added that there was “no guarantee of success and the time is practically up, but even the slightest chance must be used”. “A no-deal Brexit will never be the choice of the EU”, he said.

Johnson’s controversial offer that the DUP would have a veto on post-Brexit border relations might also be removed as talks continue, one Tory MP said.

“I think we would end up without the current consent veto, but some mechanism developed whereby the Irish parliament and Stormont have a say over the exit.

“The DUP would be surrendering their veto and Sinn Fein would be getting a vote twice effectively on it, but for lack of anything better, that might be the solution where we might be had.”