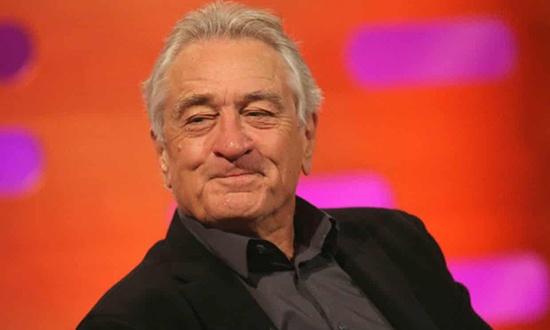 “The gall of the people around Trump who defend him’ … Robert De Niro during filming for The Graham Norton Show on Friday. Photograph: Isabel Infantes/PA

Robert De Niro has renewed his criticism of Donald Trump, calling the US head of state a “gangster president” and saying he “can’t wait” to see him jailed.

De Niro was speaking to the Guardian ahead of the London film festival premiere of The Irishman, Martin Scorsese’s new film, in which he plays mafia killer Frank Sheeran, now generally presumed to have been responsible for the murder of celebrated union boss Jimmy Hoffa in 1975.

De Niro said: “We have a real, immediate problem in that we have a gangster president who thinks he can do anything he wants … the problem is, if he actually gets away with it, then we all have a problem.

“The gall of the people around him who actually defend him, these Republicans, is appalling, and we must do something about it.”

De Niro also referred to Trump’s continuing battle with the media, saying: “It’s a resentment of people [who are] writing about what we see is obvious gangsterism. They don’t like that, so they say: ‘Fuck you, we’re going to teach you people. And they have to know they’re going to be taught … they can’t get away with bullying us – people who have common sense and see what is happening in this world, and in this country. They cannot do it. It’s a shame, it’s a shame that [the Republicans] behave so badly.”

On being asked whether he thought Trump was likely to be jailed as a result of the current impeachment inquiry, De Niro said: “Oh, I can’t wait to see him in jail. I don’t want him to die, I want him to go to jail.”

De Niro returned to the theme while recording an episode of The Graham Norton Show, due for broadcast on Friday 11 October. He said: “Today, we have a weird, twisted president who thinks he’s a gangster, who’s not even a very good gangster … Gangsters have honour, you shake a hand and they have your word and you have theirs and that’s it. But with this guy, it’s not the case.”