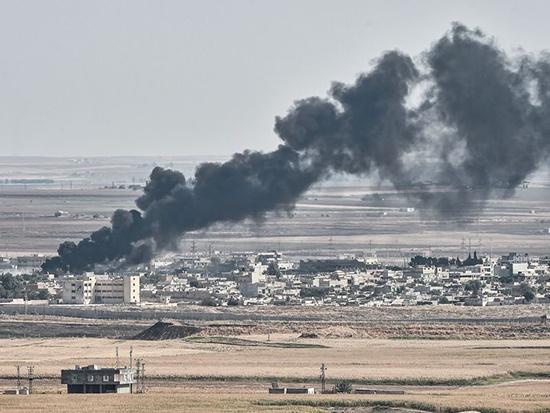 Syrian President Bashar al-Assad sent troops to the country’s northeast in response to a Turkish offensive, raising risks of an escalation after Kurdish fighters turned to Damascus in the absence of U.S. support.

The state-run SANA news agency said soldiers from the Syrian Arab Army had begun to move northwards. The Kurdish command for the northeast said it had reached a deal with Assad. The deployment comes after President Donald Trump ordered remaining U.S. forces in northern Syria to withdraw in the face of a rapid Turkish advance that has drawn international condemnation and the threat of sanctions.

President Recep Tayyip Erdogan has said his offensive aims to push back Syrian Kurdish fighters linked to the separatist PKK group that has battled the Turkish government for decades. Turkey’s aim is to carve out a buffer zone inside Syrian territory to protect its own border and resettle Syrian refugees. The Kurdish-led Syrian Defense Forces say they are fighting for their rights inside Syria alone and have accused Turkish-backed Syrian fighters of committing war crimes.

Erdogan launched the offensive on Wednesday, after receiving assurances from Trump that U.S. troops, who supported the Syrian Kurdish YPG militia in the grueling war to defeat Islamic State, would stand aside.

The effectiveness of Syria’s troop advancement would probably be limited unless it receives promises of aerial support from Russian President Vladimir Putin, according to Bob Bowker, who served as Australia’s Ambassador to Syria for three years from 2005.

“The Syrians look highly vulnerable and lightly armed in the absence of air power and probably won’t be moving toward a serious engagement with the Turks or Turkish-backed militias without it,” said Bowker, a visiting fellow specializing in Arab and Islamic studies at the Australian National University in Canberra. “A great deal about what happens in Syria’s north now depends on how the interests of Putin and Erdogan play out in coming weeks.”

Kurdish-led forces control roughly a third of Syria and have tens of thousands of Islamic State fighters, their families, sympathizers and others in their custody in prisons and camps in the northeast. They’ve warned that they will not be able to secure those areas while fending off an offensive by Turkey, a major NATO army. Even Trump allies have warned that chaos in the area could lead to an Islamic State resurgence.

U.S. Secretary of Defense Mark Esper said on CBS that Trump had directed the deliberate withdrawal of American troops from northern Syria due to an expected increase in military action. Esper said the U.S. had learned in the past 24 hours that Turkey was likely to attack further south and west and that Kurdish forces were looking to cut a deal with Assad and Russia to counterattack.

“We have American forces likely caught between two opposing advancing armies, and it’s a very untenable situation,” Esper said. “We want to make sure we don’t put our soldiers in a situation where they could be killed or injured.”

The Kurdish leadership said that while the SDF had fought hard, Turkey was pressing ahead with its campaign. “To prevent and confront this assault, we agreed with the Syrian government, who’s duty it is to defend the borders of the country and protect the sovereignty of Syria, to enter and spread out across Syria’s border with Turkey,” to help liberate the areas under Turkish control, it said in a statement.

For the Kurds, inviting in Assad could come at a heavy price. The move may succeed in pushing Turkey back across the border but will likely mean allowing Damascus to take back control over the northeast after eight years of bruising civil war that has claimed some 500,000 lives and displaced millions.

Facing a backlash at home and abroad, Trump has defended his move by saying he did not support the Turkish offensive. On Sunday, he said the U.S. Treasury had further sanctions ready to impose on Turkey. He gave no timeline.

European Union leaders may also settle on an arms embargo on Turkey over its advance into Syria as soon as this week, four officials familiar with the discussions said. Germany and France said Saturday they stopped shipments of military equipment to their NATO ally.

EU government envoys in Brussels discussed on Sunday the draft of a decision adopting punitive measures against Turkey over Syria, as well as its drilling activities off the coast of Cyprus.

According to a copy of the draft communique, due to be adopted by EU foreign ministers on Monday and seen by Bloomberg, the bloc’s nations will vow to coordinate on imposing an arms embargo against Turkey and take one more step in the process of adopting sanctions against Turkish individuals and companies involved in Mediterranean drilling operations.

But two officials familiar with Sunday’s debate said the wording in the statement will change, as many member states want tougher language: Cyprus, supported by Greece, wants a decision on drilling sanctions now, including asset freezes, travel bans, and a ban on exports of equipment which can be used for hydrocarbon exploration.

France, supported by several member states, is pushing for stronger language on the arms exports ban. Sweden, supported by the Netherlands and Denmark wants the EU to condemn the Syrian operation in stronger terms. The final decision may be left to ministers, meeting in Luxembourg, on Monday.

While the situation in Syria remains fluid and is hard to predict, the Australian National University’s Bowker said Trump’s withdrawal — which he described as a “feckless decision” in the face of Turkish threats — had already produced a win for Islamic State and a loss for the Kurds.

“Even though they have done a deal with Syria, they have a very weak hand and the U.S. withdrawal means we’re probably witnessing the end of the ambition of an autonomous Kurdish region for the foreseeable future,” Bowker said. “It also means that Russia and Syria are probably unlikely to have either the military ability or intelligence resources to prevent a resurgence of Islamic State.”