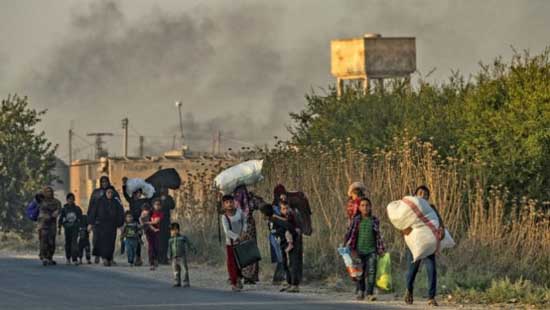 A total of 17 civilians including several children have been killed and more than 100 others were injured due to rockets and mortar shells fired by the Kurdish People’s Protection Units (YPG) on several Turkish districts in Turkey’s southeastern provinces of Şanlıurfa and Mardin since the launch of a Turkish incursion in northern Syria on Wednesday, the T24 news website reported.

The projectiles hit the Akçakale, Ceylanpınar and Suruç districts of Şanlıurfa as well as Nusaybin in Mardin, directly across the border from YPG-held northeastern Syrian territory where Turkey has launched its Operation Peace Spring.

Seven of the deaths took place in Akçakale, Ceylanpınar and Nusaybin on Thursday, while eight people were killed after they were hit by rockets and mortar shells in Nusaybin. Two others were killed in Suruç on Friday.

One of the victims in Suruç was the neighborhood head, or muhtar of the village of Çaykara, Halil Yağmurlu.

Turkey launched Operation Peace Spring against the YPG, which it considers a terrorist group and the Syrian branch of the outlawed Kurdistan Workers Party (PKK), which has been waging a bloody war in Turkey’s Southeast since 1984 and is listed as a terrorist organization by Turkey, the EU and the US.

The operation came after the United States announced it was withdrawing its troops from the region, effectively abandoning the Syrian Democratic Forces (SDF), its main ally in the battle against the Islamic State in Iraq and the Levant (ISIL) armed group.