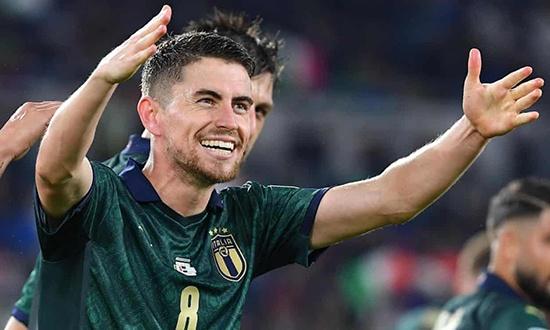 Italy’s Jorginho celebrates after putting Italy ahead against Greece from the penalty sport in Rome. Photograph: Ettore Ferrari/EPA

Italy secured their place in the Euro 2020 finals with a 2-0 win over Greece in Group J. Chelsea’s Jorginho put Italy ahead from the spot in Rome after Andreas Bouchalakis handled and Federico Bernardeschi made it two with 10 minutes left. There was no debating the penalty, with Bouchalakis sticking out his left arm to block Lorenzo Insigne’s shot.

Italy’s qualification was secured in when Bernardeschi let fly from 25 yards, with his effort taking a slight deflection and nestling in the bottom corner. Insigne came close to adding a third, Alexandros Paschalakis producing another good save.

In Group F, Josh King scored a dramatic added-time penalty for Norway to delay Spain’s qualification in Oslo. Spain looked to have secured their place with a goal from Saúl Ñíguez but the referee Michael Oliver pointed to the spot with seconds to go after Spain’s goalkeeper Kepa Arrizabalaga collided with Omar Elabdellaoui.

Spain are six points clear of third place with three games to play. Sweden in second romped to a 4-0 away victory against the already eliminated Malta, with Sebastian Larsson scoring twice. Romania put three past the Faroe Islands without reply and sit third in the group.