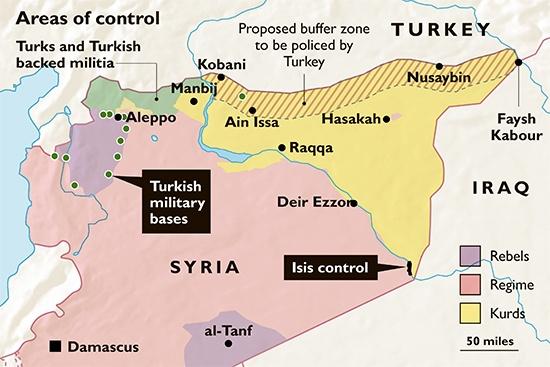 Since 2015, Turkish President Recep Tayyip Erdogan has been pushing for Syrian “safe zones” and “buffer zones” for humanitarian purposes. However, with the current media focus on the bombardment of Kurds amid the Turkish invasion of northeastern Syria, what remains submerged beneath the murky waters of Mideast politics may be Turkey’s back-door strategy to reclaim former Ottoman territories.

In a 2016 Foreign Policy article, Nick Danforth of the German Marshall Fund pointed out how Turkish TV was using irredentist maps that showed northern Iraq and northern Syria as parts of Turkey, which offered insights into Ankara’s self-image and current domestic and foreign policies.

The map was not quite the Ottoman Empire, just a slightly bigger Turkey, and in March 2019 a Bloomberg article mapped Turkey’s expanding military footprint.

With Ankara’s steady buildup of military bases abroad to access key energy corridors such as the Persian Gulf, the Horn of Africa, the Caucasus, the Red Sea and the Mediterranean Sea, as well as increasing defense ties with various energy producers, this seems to overlap with the geography of the former Ottoman Empire.

Syria. Turkey already has control over Idlib province with 12 military outposts, as well as Afrin, and now it is in midst of taking control of a strip of land bordering Turkey that is 32 kilometers deep into Syrian territory. This seems to be a salami-slicing tactic, similar to 1939 when Turkey took advantage of the chaos in World War II and annexed Syria’s Hatay province. The French allowed the Turks to take over the area hoping that they would turn on Adolf Hitler, and now the US is allowing the Turks to take over northeastern Syria.

Iraq. Turkey maintains military bases originally set up for a peacekeeping mission in the 1990s and never left. It claims its presence is a deterrent against the Kurdistan Workers’ Party (PKK) and Kurdish independence movements within Turkey.

Cyprus. Turkey maintains more than 30,000 troops in North Cyprus, which it seized in a 1974 invasion. It is staking maritime territorial claims off the coast of Cyprus over new gas discoveries, often clashing with Israel and Greece in the Eastern Mediterranean.

Afghanistan. Turkish troops are part of a NATO-led coalition and in December 2018 Ankara extended their deployment for another two years.

Turkey also reached out to Central Asia and the Caucasus via TAKM to forge a new Turkic military force. TAKM (initials of the member states) was established in February 2013 and comprises Turkey, Azerbaijan, Kazakhstan and Mongolia, with Uzbekistan, Afghanistan and Georgia expressing interest in what some tout as Turkey’s version of the North Atlantic Treaty Organization or Collective Security Treaty Organization (CSTO).

The pro-AKP paper Yeni Safak in April 2019 further called bases in Qatar, Somalia and Sudan a “triangle of peace” to maintain stability in the Horn of Africa, Mediterranean and even the Indian Ocean.

Qatar. In 2017, Turkey set up a military base in this small emirate on the Persian Gulf. It is aligned with Qatar in supporting the Muslim Brotherhood, which is at odds with Saudi Arabia and most Gulf Cooperation Council countries.

Somalia. Also in 2017, Turkey opened its largest military base in Mogadishu, equipped to train more than 10,000 Somali soldiers. This gives Turkey a foothold in the Horn of Africa and the Gulf of Aden.

Sudan. The same year, Turkey signed trade and investment deals with Sudan, including to lease Suakin Island for 99 years as a possible military base. The island is located in the Red Sea close to Saudi Arabia and was once a key naval base of the Ottoman Empire. However, with the ouster of president Omar al-Bashir the project may be halted.

Micha’el Tanchum of the Austrian Institute for European and Security Policy dubbed this “peace triangle” as Turkey’s own “String of Pearls,” and noted how Turkey’s overseas military footprint is reconfiguring the security architecture of the Mediterranean-Red Sea Corridor.

President Erdogan’s blue-water ambitions for Turkey and need for naval bases is well known. Back in 2011 at the commissioning ceremony of Turkey’s MILGEM (national warship) program, he defined Ankara’s interest as “residing in the Suez Canal, the adjacent seas, and from there extending to the Indian Ocean.”

During the Arab Spring, Turkey aligned with Qatar to support the Muslim Brotherhood in the region, which is opposed by Saudi Arabia, the United Arab Emirates and Egypt. With Egypt as the common denominator, the Saudi-UAE-Egypt alignment in the Red Sea is increasingly finding common ground with the Egypt-Greece-Cyprus alignment in the Eastern Mediterranean to counter Turkey’s territorial ambitions.

However, Tanchum noted how Turkey could soon present a formidable naval challenge when its light aircraft carrier the TG Anadolu becomes operational in 2021. It is a landing helicopter dock (LHD) capable of sailing non-stop for 30 days with a range of 1,700 nautical miles, which is almost the distance between the Suez Canal and Mogadishu. The carrier is also an amphibious assault ship able to transport a battalion-sized unit of 1,000 troops along with 150 vehicles, including battle tanks, for a marine landing.

Now with the US pulling its troops out of Syria and slowly reducing its regional military footprint, the Turkey-Qatar vs Saudi-UAE-Egypt fault line could become more pronounced. If it widens to include the Greece-Cyprus-Israel alliance in the Eastern Mediterranean, one wonders if this fault line will again be played out in Syria, with a new coalition filling the US vacuum, and perhaps new unexpected allies for the Kurds.