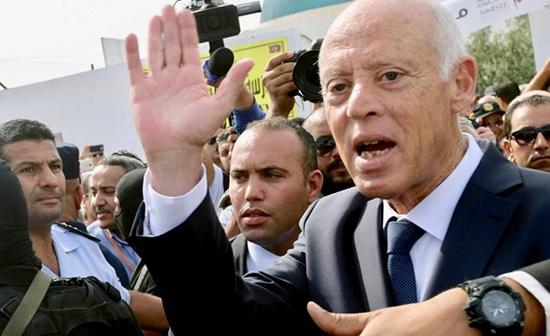 Moderate Islamist party Ennahdha congratulates Saied, saying his win is ‘step towards consolidating democracy and achieving the aims of the revolution’

Kais Saied, a political outsider with an awkward public manner, has won Tunisia’s second free and fair presidential election since the Arab Spring in a landslide, securing more than 70 percent of the popular vote, according to two separate exit polls.

Hours after polling closed, Emrhod said Saied, a retired constitutional law professor affectionately dubbed ‘Robocop’, won with 72 percent of the popular vote as opposed to media mogul Nabil Karoui, who garnered less than 27.5 percent of the vote. According to the poll, Saied won in every constituency in the North African country, from a low of 56.7 percent in the governorate of Jendouba to a high of 97.9 percent in the region of Tataouine.

A second poll by Sigma Conseil said Saied had 76.9 percent of the vote, with Karaoui at just 23.1 percent.

The moderate Islamist party, Ennahdha, congratulated Saied on the victory, saying in a statement that his win was a “step towards consolidating democracy and achieving the aims of the revolution”.

In Avenue Bourguiba, the main street in downtown Tunis, thousands of Saied’s supporters chanted songs from the 2011 uprising as they waved Tunisian flags. Traffic ground to a halt as drivers slowed traffic and beeped their horns in celebration. “Kais Saied is in Carthage, no to pasta and no to dairy,” they chanted.

Before the election, Karoui could regularly be seen handing out food and medical aid to some of the country’s poorest people on his Nessma TV channel, earning him the derogatory moniker ‘Nabil Makarouna’ – Nabil the pasta man – by his detractors.

“This is a beautiful day for Tunisians,” Salah Abdulnoor, a 25 year-old student, told MEE at the impromptu rally. “We wanted a president who understood the values of the revolution and now we’ve got one”.

Youssef Cherif, a political analyst who specialises in North African affairs, said Saied’s win had revived the high hopes that followed the Arab Spring. “Saied defied all odds by getting so many votes without a clear program, without seriously campaigning, without a political party and by being simply an idea many young and educated people could gather around.

“Today he represents a revival of the hopes of the Arab Spring – hopes of change, justice and dignity.”

On Friday, both candidates squared off in a televised debate, an event rarely witnessed in the Arab world.

Saied presented robust economic, domestic and foreign policies during the two-hour-debate, including a desire to end the war in neighbouring Libya and a rejection of normalising ties with Israel.

“I watched the debate and the thinker [Saied] came across far better than the guy who has loads of money [Karoui]”, Taher Weshtati, a voter who came to the Sunday’s polls with his son, told Middle East Eye earlier in the day.

“Now Tunisians are looking forward the future, and we are hopeful better things will come”.

Karoui had been mired in controversy since he announced his run for the presidency in early August and is currently facing charges of money laundering and tax fraud – allegations he vehemently denies.

He was sent to prison on 23 August, but was released earlier this week. During his detention his hugely popular Nessma TV channel broadcast relied on stories about his philanthropy among the poor to boost his popularity.

Although the role of president has fewer powers than that of the prime minister, the post carries wide political influence.

The prime minister, who forms a government and manages most portfolios, will be chosen by parliament in the coming months following last Sunday’s legislative elections.

Sami Hamdi, a Tunisia analyst and editor-in-chief of International Interest, said given that there were constraints on the role of president, it was unclear whether Saied could deliver on his promises.

“Saied was always expected to beat Karoui once he got to the second round. However, his success has created a conundrum. His predecessors [Mocef] Marzouki and [Beji Caid] Essebsi were isolated figures in the presidency, given the supremacy of parliament.

“Saied is the anti-system candidate, but he oversees a badly divided parliament within which he himself has no representatives.

“It remains to be seen how he will deliver on the hope he has instilled in large numbers of young voters who voted for him”, he said.

The 13 October vote had been brought forward by the death in July of 92-year-old president Beji Caid Essebsi, who helped guide the North African country’s transition to democracy.

Essebsi had been elected in the wake of the 2011 revolt that overthrew longtime autocrat Zine El Abidine Ben Ali, and he presided over a bitterly divided parliament that is even more fractured since last Sunday’s legislative election.