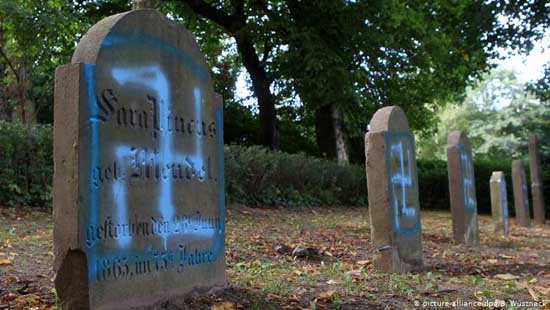 The German government plans to boost funding for organizations tackling anti-Semitism and far-right extremism. But long-term funding is hard to come by, making a continuous commitment to their causes difficult.

Exit, a scheme to help former German neo-Nazis change their ways and extricate themselves from an extremist community, faces an uncertain future. It is not clear whether the program, which has been running for 20 years, will receive the €250,000 ($275,000) in funding needed to stay operational in 2020.

The news came as a shock to many who have profited from the scheme so far. The organization’s founder, Bernd Wagner, says that the neo-Nazi scene is trying to track “some of them [former neo-Nazis] down and even sends them death threats.” That is why, he says, his organization must be kept running to help protect and council these individuals.

Six years ago, the German government promised Exit would receive long-term funding. But Wagner says “nothing ever came of that,” adding that he feels he can’t take the previous and current government serious anymore.

The scheme, like numerous other ones aimed at combating extremism, is funded through Germany’s Live Democracy! program. It, in turn, gets money from the German state, yet recently made headlines when plans emerged to cut its 2020 budget by €8 million.

But several hours after news of last Wednesday’s deadly anti-Semitic and xenophobic attack in Halle broke, it was announced that the budget would not be cut after all. Germany’s Family Ministry, which oversees the program, said Live Democracy! would next year receive a budget of €115 million — the same amount it had available in 2019. A ministry spokesperson told DW that “these additional funds are aimed at addressing present challenges, and further organizations active in this field will be supported.”

Projects worry about the future

Despite this decision, many German organizations working to combat racism and anti-Semitism worry about their long-term future. That is because the German government supports model projects, and provides between three and five years’ worth of funding. Yet after this funding period is up, these organizations — even well established ones like Exit — are back to square one and must re-apply for funding. The German government does not have a strategy in place to provide long-term financial support for them.

A project that has made it into the funding program must each year apply for a funding extension. Submitting these applications, however, takes time and effort. But that makes “long-term, focused work” almost impossible, says Sophia Oppermann. She manages “Gesicht zeigen” (“show your face”) project, which takes action against anti-Semitism and right-wing extremism. In her opinion, “the model project system means Germany’s politicians contaminate and counter their very own goals in this area.”

Gesicht zeigen do not know whether they will have sufficient funding to keep their organization running in 2020. They submitted funding applications for three projects but had two rejected. Now, they will resubmit an application for their third project, hoping that it will get the go-ahead by December.

But there is no guarantee, and it means the organization’s employees cannot be sure they will still have a job by January 2020. “As a result, they start looking for work elsewhere,” Oppermann says, adding that, this way, her organization risks “losing the expertise and skills needed for [their] projects.”

Excessive red tape, an inability to make long-term plans and insufficient funding make life very hard for these organizations. It’s why they are now calling on lawmakers to act, as the far-right poses a serious threat in Germany — not just since Wednesday’s attack in Halle, which Christian Democrat leader Annegret Kramp-Karrenbauer merely described as a “warning sign.”

But Heiko Klare of Germany’s Mobile Counseling Service Against Far-Right Extremism says swastika graffiti and the desecration of graves are warning signs; the deadly attack in Halle he calls a “disaster” we have been building up to for quite some time.

Indeed, according to Germany’s Interior Ministry, the number of recorded anti-Semitic crimes has been increasing over the past four years. In 2015, 1,366 such attacks were registered. But by 2018, that figure had climbed to 1,799 — approximately five per day. Bernd Wagner of Exit says that ever more anti-Semitic conspiracy theories are being disseminated, too. Including, he says, one conspiracy theory about a global Jewish cabal looking to take over. Wagner says it is slowly gaining traction in less extremist circles, too.

Klare says that in order to counter these worrying developments the German government must decide on a strategy to strengthen German democracy. He says not only should exemplary projects be supported but also long-term funding guaranteed for well-established initiatives, enshrined in law if need be.

Several German lawmakers have already expressed their support for such a law. Claudia Roth of the Greens told German daily Augsburger Allgemeine that”we must give more support to organizations that foster our democracy, fight far-right extremism and racism, and stand up for minorities — and we need a law that guarantees that.” And the government’s integration commissioner, Annette Widmann-Mauz of the Christian Democrats, asked “what else needs to happen for people to wake up and realize that Germany has a serious far-right problem?”

Franziska Giffey of the Social Democrats, who heads Germany’s Family Ministry, has repeatedly called for such a law. But the Christian Democrats have blocked it. Giffey, meanwhile, has vowed to keep “urging coalition partners” to pass such a law.