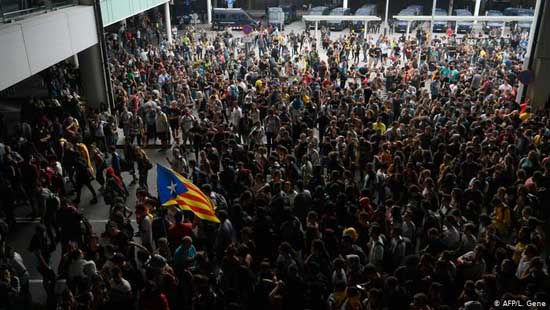 Riot police have confronted thousands of protesters outside Barcelona’s airport. The unrest came after Spain’s Supreme Court sentenced nine Catalan separatist leaders to prison terms of up to 13 years.

Police have fired foam bullets and used batons against thousands of protesters who converged on Barcelona’s airport. Protesters fought back by throwing objects, spraying fire extinguishers and breaking windows during clashes that lasted into the night.

Earlier Monday, the Spanish Supreme Court imposed prison sentences ranging from nine to 13 years on nine Catalan separatist leaders, prompting thousands to take to the streets of Barcelona to vent their anger.

The prison terms were lower than demanded by the prosecution, which had requested up to 25 years behind bars for the former Catalan Vice President Oriol Junqueras.

The court sentenced Junqueras to 13 years of prison on grounds of sedition and the misuse of public funds. It also handed 12-year terms to three other former regional ministers.

No sooner had the verdict arrived than people began to fill the streets, notably in Plaza Catalunya at one end of La Rambla in Barcelona.

By lunchtime the square was packed with thousands of demonstrators, many waving yellow, red and blue Catalan separatist flags or banners reading “We would do it again” and “Freedom for political prisoners.”

Who are the accused?

In the dock were 12 former Catalan politicians who were being tried for their actions in the 2017 attempt to break away from Spain after an independence referendum that was ruled illegal. Three of the accused were not imprisoned, having been found guilty of disobedience but not sedition.

All the defendants were acquitted of the most serious charge of rebellion.

Puigdemont had responded to the sentences on Monday, declaring the jail terms an “outrage.”

“It is time to react like never before. For the future of our sons and daughters. For democracy. For Europe. For Catalonia,” he wrote on Twitter.

Puigdemont was the head of the Catalan government at the time of the independence bid, but he was not part of this trial because he fled to Belgium.

Spain’s caretaker prime minister, Pedro Sanchez said he hoped the sentence would mark a watershed. He urged people to “set aside extremist positions” and “embark on a new phase” for Catalonia.

The football club FC Barcelona responded to the news of the jail terms with the statement “Prison is not the solution.”

What effects could the ruling have?

Both the government and separatists released their own videos on social media before the verdict. Separatists claim the trial was political and say they have done nothing wrong, while the government says the trial has strictly adhered to the law.

Madrid has said it is prepared to take direct control of Catalonia, as it did briefly in 2017, should leaders of the separatist movement break the law.

The ruling is likely to muddy the waters ahead of a national election on November 10 — Spain’s fourth in four years. The vote is scheduled for November 10, and will likely influence the direction taken by the separatist movement.

A July opinion poll showed that 48.3% of Catalans were against secession and 44% were in favor. The 2017 referendum was overwhelmingly in favor of secession, but with low turnout as opponents boycotted the vote.