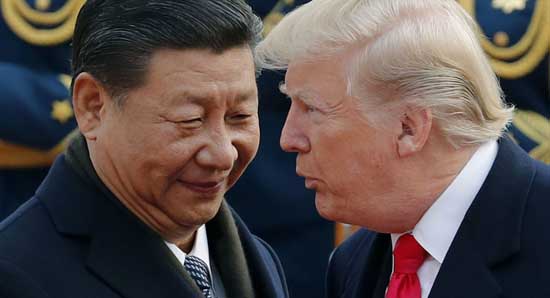 Beijing and Washington have gotten closer to signing a partial trade agreement, says Tom McGregor, Beijing-based author and senior editor for China’s national broadcaster CCTV. He explains why he does not anticipate new bumps in the road for the US-China trade talks.

On 12 October, President Donald Trump signalled that the US and China have finally found common ground on at least some issues and may soon strike a new comprehensive trade deal.

It was also reported that Washington would not raise tariffs from 25 percent to 30 percent on $250 billion worth of Chinese goods on 15 October. A further 15 percent tariff on Chinese IT products still may be imposed on 15 December if the countries fail to reach an agreement by that time.

“The deal I just made with China is, by far, the greatest and biggest deal ever made for our Great Patriot Farmers in the history of our Country”, Trump tweeted Saturday.

​For his part, Chinese Vice Premier Liu He pointed out that the participants of the summit conducted candid, efficient, and constructive discussions and made substantial progress in a number of areas including agriculture, intellectual property rights protection, exchange rates, financial services, expansion of trade cooperation, technology transfer and dispute settlement, according to Xinhua.

Chinese media outlets have, however, adopted a more cautious stance: “While the negotiations do appear to have produced a fundamental understanding on the key issues and the broader benefits of friendly relations, the Champagne should probably be kept on ice, at least until the two presidents put pen to paper, as based on its past practice, there is always the possibility that Washington may decide to cancel the deal if it thinks that doing so will better serve its interests”, the state-run English-language China Daily emphasised on Sunday.

Big Step: US, China Getting Very Close to Signing of Partial Trade Deal

Tom McGregor, a Beijing-based political analyst, senior editor for China’s national broadcaster CCTV and the author of US vs. China: From Trade War to Reciprocal Deal (2019), holds an optimistic stance about the recent developments.

“Very positive and we are getting very close to United States President Donald J. Trump and Chinese President Xi Jinping to sign a partial US-China trade agreement”, he says.

McGregor refers to the fact that Beijing decided to step up agricultural purchases to $40-50 billion from $8-16 billion calling it a “big step”.

​He notes that the People’s Republic also agreed “to do a better job at protecting intellectual property rights and to open up the nation’s financial markets even further by allowing US investment firms and banks to expand operations in the country”.

“The partial deal appears to be a big win for US agriculture, finance and leaning branding companies”, the Beijing-based author underscores. “Chinese exporters can avoid getting hit by US tariffs going higher in the future. China’s manufacturing sector and supply chains were struggling amid US-China trade wars and they can avoid catastrophe for the moment”.

‘The Goal is to Avoid Making Trump Angry’

McGregor, who has been monitoring the US-China trade row closely from day one, does not anticipate future stalemates, since both sides “are more eager to endorse a bilateral trade agreement”, according to him.

Commenting on China Daily’s cautious stance, the Beijing-based journalist explains that “Chinese trade officials hope to avoid new surprises and disappointments” and “not celebrating for the moment” since they saw a trade truce disrupted by Washington in May 2019.

“So the goal is to avoid getting President Trump angry at them so he would have another excuse to keep raising tariffs on Chinese imports despite another trade truce getting accepted last week when China’s Vice Premier Liu He met President Trump at the Oval Office in the White House last Friday”, he suggests, adding that for his part, Donald Trump “appears more eager to sign a trade deal”.

The new trade agreement with China may come in handy as Trump’s new win amid the so-called “impeachment inquiry” kicked off by some House Democrats in late September.

Although Trump previously accused China of delaying the deal in the hopes that he would lose to a Democrat in 2020, McGregor says that “the Chinese know Trump won’t get impeached and that it’s very likely he will get re-elected to the White House in 2020”.

“Beijing understands that delaying a trade deal could harm the nation’s self-interests in the long-term”, the political analyst stresses.

On the other hand, McGregor continues, some Democratic presidential candidates demonstrate a tougher attitude towards the People’s Republic than Trump.

“Elizabeth Warren appears poised to win the Democratic Party nomination for president and she is tougher on China than Trump and Beijing knows that. Beijing will not score any winning trade deals with the US if Warren goes to the White House”, the Beijing-based author remarks.

There have already been a lot of bumps in the road in the Sino-American trade negotiations. In May 2019, the talks ended up in a stalemate prompting the resumption of the trade war between the two countries that began in spring 2018. On 10 May, Donald Trump raised tariffs from 10 to 25 percent on $200 billion in Chinese goods triggering a series of tit-for-tat measures.

Additionally, on the eve of the October 2019 round of the talks Washington banned almost 28 Chinese companies, government offices, and security bureaus over what it called “human rights violations and abuses” against Uighur Muslims. The US earlier blacklisted China’s telecom giant Huawei as well as dozens of its affiliates over its alleged “spying” on behalf of the Chinese government.