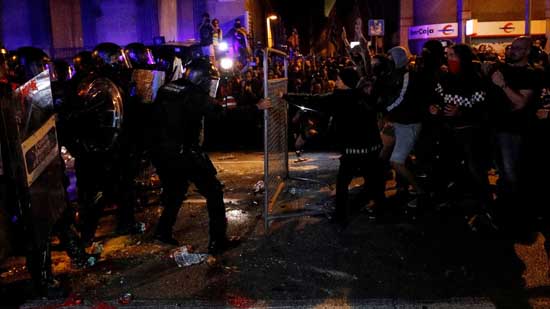 Catalan protesters are facing off against riot police in Barcelona for the second day following the jailing of 9 prominent pro-independence officials by Spain’s supreme court over their roles in the region’s failed secession bid.

Footage from the city centre shows large groups of protesters attacking police vans as repeated loud explosions are heard in the background and fires can be seen raging on the streets.

At least four people who were in the vicinity of the government building have been detained, according to local police.

The Supreme Court declared on Monday that the jailed politicians were involved in “undeniable” acts of violence during Catalonia’s attempt to gain independence from Madrid in 2017. Former Catalan premier Carlos Puigdemont, who led the movement for independence, tweeted from exile in Belgium, calling the verdict an “atrocity.” Spain, on its part, renewed its bid to get hands on the politician and issued a new European arrest warrant for Puigdemont himself.

With the prison sentences for Catalan leaders providing new impetus for the movement, pro-independence figures have promised to continue their push for a new referendum.

One protester lost his eye in clashes between the activists and police at Barcelona airport on Monday night as tensions erupted over the court ruling.