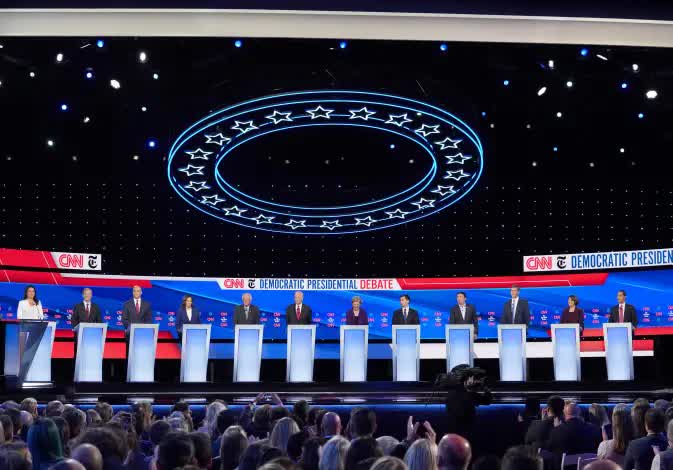 “Some times there are issues that are bigger than politics,” Massachusetts Sen. Elizabeth Warren said.

The first question in the Democratic debate focused on the impeachment inquiry into President Donald Trump and Ukraine.

With 12 candidates on the stage at Otterbein University in Westerville, they were all asked different questions regarding the impeachment process. Here’s what they said:

Massachusetts Sen. Elizabeth Warren: “Some times there are issues that are bigger than politics, and I think that’s the case with this impeachment inquiry.”

Vermont Sen. Bernie Sanders: Trump is “the most corrupt” president ever

California Sen. Kamala Harris: “Maya Angelou told us, ‘Listen to somebody when they tell you who they are the first time.’ During that election, Donald Trump told us he could shoot somebody on Fifth Avenue and get away with it. He has consistently since he won been selling out the American people.”

South Bend, Indiana, Mayor Pete Buttigieg: “The President has left the Congress with no choice.”

Businessman Tom Steyer: “I want to remind everybody that every candidate here is more decent, more coherent and more patriotic than the criminal in the White House.”

Former Housing and Urban Development Secretary Julián Castro: Trump has broken his promises to Ohio … He is ongoingly violating his oath of office and abusing his power. He should be removed.

Minnesota Sen. Amy Klobuchar: Our constitutional duty to pursue impeachment … he has not been standing up for workers of Ohio, the farmers of Iowa. He’s digging up dirt on an opponent. That is illegal conduct.

New Jersey Sen. Cory Booker: We must be fair … must be honorable and not rip us apart. This is a moral moment, not a political one.

Former Vice President Joe Biden: Trump is stonewalling Congress … This president is the most corrupt president. (Congress has) no choice but to move.

Hawaii Rep. Tulsi Gabbard: I support inquiry … that is the only way forward.

Former Texas Rep. Beto O’Rourke: “We have a responsibility to be fearless in the face of this president’s criminality and lawlessness.”

Beto O’Rourke on the impeachment inquiry: “We have a responsibility to be fearless in the face of this President’s criminality and his lawlessness” #DemDebate