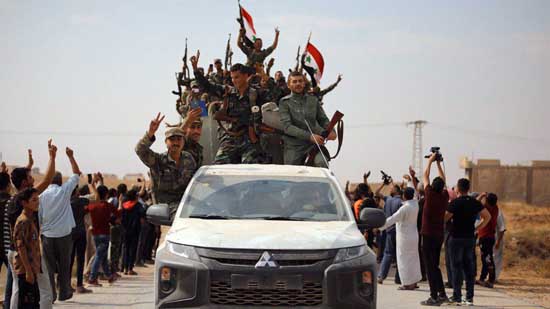 Tensions in eastern Syria are flaring, after Turkey launched its military operation in the country’s north-east. As Turks and their proxies advance, Kurds retreat, defending themselves – possibly right into the arms of Damascus.

The state of play

Turkish forces are targeting two areas, Ras al-Ayn and Tel Abyad. They have inched forward 10-15 km into Syrian territory towards Ras al-Ayn and are up to 30 km inside Syria on the way to Tel Abyad. They have even set up a foothold mid-way. The Turkish army wants to block the strategic M4 highway along the Turkish border, which links Syria’s economic capital Aleppo with its administrative center, Al-Hasakah, in the country’s north-east.

Turkey has deployed commandos, special ops forces, tanks and artillery. Its forces on the ground, all part of Operation Peace Spring, include 14,000 troops, 120 tanks, 230 armored combat vehicles and 240 artillery pieces.

Ankara’s campaign is also supported by the Free Syrian Army (also known as the New Syrian Army), which has been sent into the vanguard of the offensive by Turkey. That would put the total headcount at about 25,000 soldiers and officers. Most importantly, the ground troops are supported by five squadrons of the Turkish air force, with 12-18 sorties every day.

At first glance, Operation Peace Spring appears relatively insignificant for the 700 km Syrian-Turkish border. But the offensive is taking place along two relatively narrow corridors. If Turkey’s strategy pays off, the Kurds would have to retreat from other regions in northeastern Syria.

Turkey’s military planners will seek to surround the key defensive locations of the Kurds, and push locals to the south and east, towards the Iraqi border. More than 120,000 civilians have been displaced, fleeing Turkish troops and the so called Syrian National Army for the towns of Qamishli and Al-Hasakah.

Up to half a million people to the north of the Euphrates may become displaced in the coming days. Turkish air raids are increasingly targeting civilian facilities, including camps for internally displaced persons (IDPs) and detention centers for former Islamic State (IS, formerly ISIL/ISIS) fighters (including from the US and Europe) and their families.

Before the Turkish campaign, the Syrian Democratic Forces controlled seven jails for IS fighters and at least eight camps for IDPs with half of them housing extremists’ wives and children. According to the UN, these penitentiary and shelter facilities held up to 110,000 people, representing 72 ethnic groups from 36 countries.

There is a grave danger that many of the civilians residing in camps may die of hunger or rampant disease while terrorists could break free.

Under an arrangement with the US, the Kurdish military leadership sent the most combat-ready units to guard prisons and IDP camps. And there weren’t too many such units in the Syrian Democratic Forces.

Following the launch of the Turkish campaign and the withdrawal of US troops from the border, a move considered to be ‘a stab in the back’ by the Kurds, the Syrian Democratic Forces said the units that secured oil fields and the Iraqi border in the south of the Deir al-Zor province, as well as units that used to guard detention centers and IDP camps, will be relocated to the frontline.

It is not surprising that fewer security guards and Turkish air raids have allowed some of the inmates to flee. On October 11, after an air strike damaged the building and the perimeter fence of a prison for former IS fighters near the town of Qamishli, five (some reports say 15) of them made their way out of it with the arms that had belonged to the guards killed in the air attack.

The detention center for former IS fighters in Al-Malikiyah, located in the northeastern part of the Al-Hasakah province, has already seen a mutiny. On October 12, several dozen detainees took hostages, seized transport vehicles, used force to free their families from the nearby camp for displaced persons and ran off.

It’s highly likely that foreign nationals who fought for IS in Syria will go back home to Europe.

As for the Kurdish resistance, it will be crushed in any case, since the Turkish army is superior to the Kurds’ in heavy weapons and Ankara dominates the skies. And, frankly, some sources are clearly overestimating the Kurdish forces’ combat effectiveness.

The best Kurdish units can probably match Syrian general Suheil al-Hassan’s battalions. That is to say, Kurds can win against an adversary of similar strength. Faced with a modern army trained and equipped according to NATO standards with fighter jets, helicopters, tanks, artillery, recon and electronic warfare systems, Kurds stand no chance of winning.

The Turks had notified the Russian military attaché based in the embassy in Ankara about Operation Peace Spring, whereas the command of Russian forces in Syria hadn’t been notified in time. Today, they use comms to talk once or twice daily.

What options do the Kurds have left now? Their only option seems to be for the Syrian Democratic Forces to withdraw from the border and lay down their arms. The most combat-effective units can be restructured and integrated into the regular Syrian army.

The other option is to die fighting. It seems the Syrian Democratic Forces have no more variants. To survive, they have to come under the Syrian government’s wing. That’s the reality the Kurdish leadership has to accept sooner or later. Today, everything is against the Kurds.

When the counter-terrorism operation aimed at crushing IS kicked off, the Kurds were approached by the Russian command and some top Syrian officials. At first, the Kurds seemed to be making steps towards working together, but soon enough they ended up under US control and all talks about cooperation fizzled out. Basically, back then the US just paid the Kurds handsome sums so that they carry out military operations against IS. By and large, that’s what the Kurds were living on.

Besides, an overwhelming majority of the Syrian elites was dead set against cooperating with the Kurds in any form, since they were questioning Syria’s territorial integrity, to put it mildly. The situation has changed drastically since then, though, with the Kurds now asking for Syrian forces to be sent to the Kurdish-controlled areas and staying away from the issue of Syrian territorial integrity altogether.

Incidentally, there were attempts to reach an agreement with the Kurds during Turkey’s previous military operation, Olive Branch. Syrian government forces wanted to take the hard-fought-for Afrin, but the Kurds started haggling. In the end, Afrin was occupied by Turkish forces, who right away started working on changing the ethnic ratio in that part of Syria.

US forces, having left the Manbij area in a hurry, are leaving no fortified zones in their wake, since all they have in the area are makeshift fortified structures, and all their airfields have dirt runways. If we look at what the US presence has achieved in the region, we would have to conclude that the US hasn’t managed to propose a constructive agenda for the Middle East. All their efforts have come to naught.

The US Armed Forces deployed in northeastern Syria included Marines and Special Operations units. In reality, however, the US presence was negligible, with no more than 150-200 troops and officers. Add the rest of the Western coalition members and the total number goes up to about 2,500 people. The order to pull US troops out of the region has been given; plans and general timeframes have been prepared. So far, the one thing that remains unclear is the precise date.

What’s next? When will the Turks leave northeastern Syria? Thus far, they have maintained their presence in Northern Cyprus, al-Bab, Afrin and Idlib. As for the Syrian regions bordering Turkey and occupied by Turkish troops, the local population is being actively ‘turkeyfied’: branch campuses of Turkish universities are opened, Turkish banks start operating in Syria, and in schools, children are being taught in Turkish.

It appears that Operation Peace Spring will be completed once the Turkish army reaches the strategic M4 highway. However, it is highly likely that, within months after they do, a concrete wall several meters high will be constructed along this road.

With Turkey’s military operation in northeast Syria underway, the general situation in the country has deteriorated significantly. IS sleeper cells have been activated in almost all Syrian provinces, especially in the south.

But northern Syria is just as turbulent. For example, in the Idlib province, the Turks control only a small portion of the forces. Up to 20-30 times a day, terrorists carry out attacks, their shelling aimed at Syria’s government forces. Moreover, the Turks withdrew a significant section of troops especially loyal to Ankara from the Idlib de-escalation zone and sent them to northeastern Syria to fight the Kurds. So, it would not be an overstatement to say that, at this moment, the Turks in Idlib have little to no control, at all.

Another curious thing about the whole Idlib situation is that Turkey’s ninth observation post in the province is currently in an area controlled by Assad’s troops. This happened as a result of military activities, during which terrorist groups in southern Idlib, concentrated mainly around Khan Shaykhun, were defeated and forced to flee back to the central part of the province.

It was from these areas that the terrorists fired at Russia’s Khmeimim airbase, using multiple-launch rocket systems. And it was from there that they launched drone strikes, attempting to destroy Russian aircraft located at the airbase.

The terrorists were ultimately eliminated and forced to retreat – as for the ninth observation post, the Turkish forces stationed there now receive food, fresh water and medicine from the Russians at Khmeimim. A fun fact: when passing by Turkey’s observation post, Russian troops receive a message on their mobile phones reading ‘Welcome to Turkey.’

Overall, though, Turkey’s actions in Syria could be compared, to some extent with that of the proverbial bull in a china shop. As for the ultimate outcome of Operation Peace Spring, it is far too early to say.