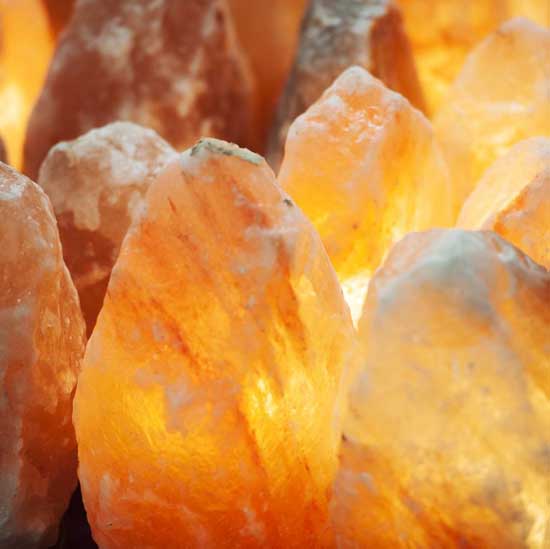 If you’ve ever come across a softly glowing pink or red crystal-style lamp, chances are you’ve been looking at a Himalayan salt lamp. Created from chunks of mineral-rich rock salt mined from the Himalayas in Pakistan, these lamps are highly decorative and emit ambient lighting, making them a popular addition to homes and wellness spas.

But on top of their visually appealing nature, proponents of the lamps claim they offer a host of powerful and protective health benefits. So just what is the secret to Himalayan salt lamps, and do they really work?

Simply having a Himalayan salt lamp in your home is supposed to transform your health and they are believed to come with the following benefits:

🔥 Detoxifying the air around you

🔥 Helping with respiratory conditions, such as asthma

But while the claims are bold, the evidence is somewhat lacking. ‘The science behind this suggests that negative ions said to be released from the lamps are thought to clean the air around us and draw in toxins, pollutants and allergens from the air,’ explains Dr Gall from Doctor-4-U.

‘It’s also been suggested that negative ions can improve blood flow and enhance breathing, as well as being a stress reducer and mood booster.’

Currently, claims that the Himalayan salt lamps produce negative ions are unfounded, as research has yet to be carried out to support this claim. And, experts say, even if it was true, several scientific studies have concluded that high concentrations of negative ions in the air have no impact on the respiratory health of humans, or on mood.

Unfortunately, even if the lamps did emit negative ions, and even if these negative ions did have a positive impact on human health, experts are in agreement that the lamps would still be unlikely to have the desired effect.

The amount of negative ions produced is not proven to improve human health.

‘The amount of negative ions produced by Himalayan salt lamps is on such a small scale that they’re not proven to improve human health,’ says Dr Gall.

That said, Dr Gall says that the soft lighting and ambient environment created by the Himalayan salt lamps may still have a positive impact on mental health.

‘It is possible that having them in your home could boost your mood,’ she says. ‘The lamps are pleasing to look at and they can brighten a room, which can also brighten your mood. Those who suffer from seasonal affective disorder may benefit from having a salt lamp in their bedroom, as the soft orange hues of the light bulb inside the lamp mimic natural light, and can be calming and uplifting.’

While their cure-all powers are questionable, Himalayan salt lamps could be used as a meditation aid. Meditation has been proven to reduce stress levels, lower anxiety, alleviate depression and improve sleep, all of which are highly beneficial to both your physical and mental health.

Although of course, you can meditate and gain all of these benefits without the use of a Himalayan salt lamp too.