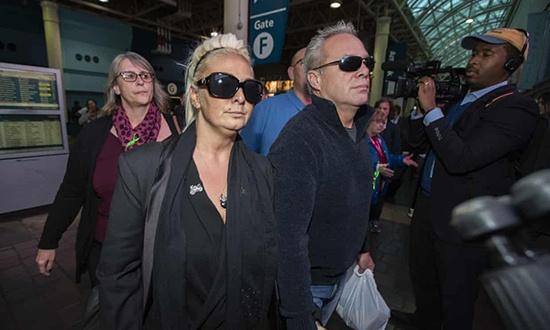 David Smith in Washington  – The Guardian

British parents grieving their teenage son have told how, during a visit to the White House on Tuesday, Donald Trump dropped the “bombshell” that the woman who allegedly killed him in a road crash was waiting for them in an adjoining room.

Charlotte Charles and Tim Dunn turned down the rushed offer to meet Anne Sacoolas, who is married to a US diplomat, describing it as “not appropriate” with no mediators or therapists present.

Their son, Harry Dunn, 19, died in August in a head-on collision between his motorcycle and a car being driven on the wrong side of the road, according to Northamptonshire police in the UK. Sacoolas was allegedly driving the car and, claiming diplomatic immunity, flew back to the US.

Dunn’s parents travelled to New York this week to urge Sacoolas to return and engage with a police investigation. They were surprised to receive an abrupt invitation to the White House in Washington on Tuesday – and even more taken aback by the offer that came without prior warning from Trump, a former reality TV host.

“The bombshell was dropped soon after we walked in the room: Anne Sacoolas was in the building and was willing to meet with us,” Charles told reporters after the meeting, which lasted 10 to 15 minutes. “We made it very clear that, as we’ve said all along, we will meet with her and we would still love to meet with her but it has to be on our terms and on UK soil.”

She continued: “We were a bit shocked but it didn’t really make any difference to us, to be perfectly honest. She could have been two miles away; it’s just she was in the room next door. Our grief’s been locked in for several weeks. It’s not appropriate to meet her without therapists and mediators for us as a family but also for her. How can it be comfortable for her to be thrown into a situation like that without therapists and mediators?”

Asked if they regarded the plan as a “stunt”, Dunn hesitated before replying: “No, I don’t think so. I would think maybe they were trying to force it on to us but I still think the president was sincere at the end when he spoke to Charlotte.”

At first, Trump also flatly ruled out any possibility of Sacoolas returning to the UK, without giving a reason, but he signalled a possible shift later in the conversation. Dunn’s parents also praised his warm and compassionate manner, noting that he held Charles’s hand.

Speaking outside the White House, Charles recalled: “When we first got there, he extended his condolences to us, which did feel sincere. I don’t suppose we would have expected anything else. Many of his staff also did the same on the way in.

“We then went round in circles a little bit because I think they were trying desperately to get us to not give in to accept the invitation to meet her on their terms, which we weren’t willing to do.

“So, upon leaving the meeting and ending the meeting, I said, ‘If it was your 19-year-old son, or your son no matter what age, you would be doing the same as me.’ And he actually grabbed hold of my hand little bit tighter and he said, ‘Yes, I would be. Maybe we’ll try and push this from a different angle.’

“There’s that tiny little bit of hope that he will take another look and maybe work harder for us.”

The episode has provoked an outcry in the UK but received less attention in the US, where Trump is facing impeachment and multiple other distractions.

Boris Johnson has said Sacoolas should return to Britain, insisting: “I do not think that it can be right to use the process of diplomatic immunity for this type of purpose.” But a photograph of briefing notes held by Trump at recent event indicated that “the spouse of the US government employee will not return to the United Kingdom”.

Asked if she felt the parents had made progress since arriving in America, Charles said: “I feel like we’ve got a little bit of progress. We didn’t get the answers that we wanted. They couldn’t tell us who made the decision to let her come back to the US. We asked how long she was there for; they still state it was three weeks; we’re not totally sure about that. And I think paperwork needs to be shown to prove that somehow.”

But she said her son would have been “proud” of his parents taking his case all the way to the White House and meeting the US president. “He was always one to stand up for his rights when he knew he was in the right,” she said.

“He would do everything that he could possibly do to make sure that he had that heard, anyone that he felt was being served any injustice … he would have their back. He would be really proud and he’s riding the skies up there now and pushing us on to continue to do him proud and more than anything now do his twin brother proud and his siblings.”

Charles and Dunn will remain in the US for a few days and still have questions for the UK’s foreign office, including what date Sacoolas returned to the US and who made that decision. Charles said: “We still want justice for Harry and we will take it as far as we possibly can to ensure that that’s done. We do feel at this stage I think that we’ve pretty much done as much as we can at the moment.”

A statement previously released on Sacoolas’s behalf said she spoke with authorities at the scene of the accident and again the following day and would continue to cooperate with them. It said: “Anne is devastated by this tragic accident. No loss compares to the death of a child and Anne extends her deepest sympathy to Harry Dunn’s family.”