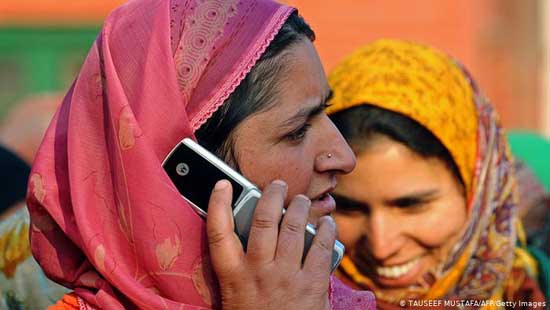 India has reversed a decision to allow text messages in Kashmir after a truck driver was killed by militants. Although a two-month communications lockdown has been partially lifted, most services remain cut.

Text messaging services in India-administered Kashmir were restored on Monday morning, but there were blocked again by Monday night after a truck driver was killed by suspected militants.

Security authorities said that blocking text messaging would reduce the ability of militants to communicate, according to AFP news agency.

On Saturday, authorities had announced they would partially restore mobile phone usage in the restive region.

All internet and most phone services have been cut off in Kashmir in a two-month communications lockdown.

The restrictions came after New Delhi stripped Kashmir of its semiautonomous status on August 5, which sparked widespread protests and triggered a new standoff with Pakistan. Indian authorities also applied a curfew and sent in tens of thousands of troops.

Recently, India has begun to gradually ease the restrictions in Kashmir. Landlines were turned back on last month, and a travel ban to the region was lifted last week. However, all prepaid mobile services and broadband internet remain cut off.

Indian authorities in Kashmir say that insurgents and separatists demanding independence from Indian rule could use the internet to organize protests that could grow into large-scale demonstrations.

Police said the truck driver killed on Monday had been transporting apples, a trade good targeted by insurgent groups because it is an important part of Kashmir’s trade with India.  After the driver was killed, police said the truck loaded with hundreds of apple boxes was set on fire.

In protest against the Indian government, many orchard owners in Kashmir have reportedly refused to harvest their crops this year.

On Tuesday, 13 protesters were arrested in the regional capital Srinagar for demonstrations calling for civil liberties and release of detainees. Thousands of Kashmiris have been detained since India’s clampdown began in August.

The women had reportedly assembled in a park, carrying signs reading “Respect Fundamental Rights” and “Why downgrade Jammu and Kashmir?”

Police said the women were arrested for “breaching the peace” and violating a ban on unauthorized public gatherings of more than four people.

In a separate incident, Indian officials said a women was killed by artillery fire Tuesday near the so-called “line of control” diving the India and Pakistan-administered regions of Kashmir.

Pakistan and India both rule the disputed Himalayan territory in part, but claim it in full. The restive region is a flashpoint between the nuclear-armed neighbors.