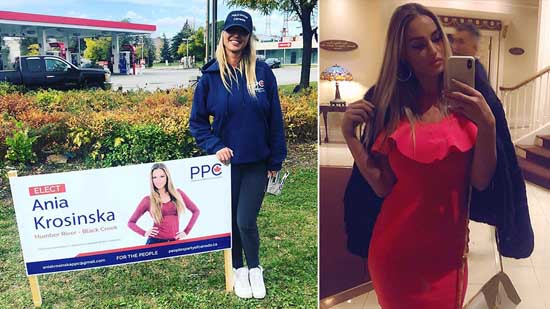 Hotly contested parliamentary elections are due to take place in Canada next week, but the electoral race is heating even further, as evidenced by former Playboy model turned politician Ania Krosinska.

Justin Trudeau’s Liberal Party is under fire from all sides as his political opponents seize on a series of high-profile racism and corruption scandals to try and edge ahead in the polls and take the house.

But not all of his opponents are going all guns blazing, as Korsinska, a member of the right-wing anti-immigration People’s Party of Canada (PPC), has adopted a different, more eye-catching approach.

Polish-born former Playboy model Krosinska, 35, emigrated to Canada from Poland when she was young and is now putting it all on the line (or on show) as she runs for office in Humber River – Black Creek, near Toronto, with a population of approximately 110,000.

Krosinska is no stranger to fierce competition and the joys of victory, having won both the Miss Hawaii and Miss Toronto pageants, after which she appeared on the cover of the prestigious Playboy magazine.

Her party, the PPC, was only founded by MP and current Trudeau rival Maxime Bernier, in September 2018 but is currently on 3.1 percent of the vote, according to recent polls in the run-up to the October 21 election.

Krosinska isn’t the only former Playboy model trying their hand at politics, as Ava Karabatic recently announced she would be running for the presidency of Croatia.