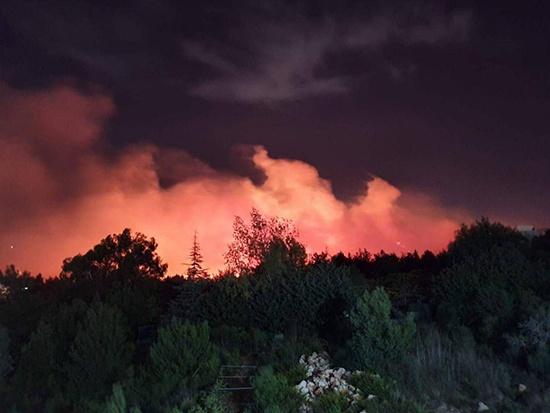 Hospitals in Chouf are not answering calls, however, two cases of intoxication, three cases of trauma, and one case of injury were reported by Damour Medical Center.

“This is a big shock, and it’s certain that someone started the fire, and whoever did must be punished with the death penalty,” said Minister of Environment Fadi Jreissaty.

In an attempt to protect Lebanon’s forests and nearby residents, the Lebanese and Cypriotic forces partnered up to put the flames out. According to the Minister of National Defense Elias Bou Saab, both Greece and Jordan respectively sent two advanced helicopters to try and suppress the fire. The severity of the fire blaze caused UNIFIL to intervene and help extinguish it.

“Lebanese authorities have bought two helicopters many years ago to extinguish fires but it turns out that they’re not in good condition since they haven’t been maintained due to the high maintenance costs,” Minister of Interior Raya Hassan told LBCI.

The fire reached the industrial zone in Naameh, as well as some buildings around Al-Saydeh Church. Arcenciel in Damour is among many properties that were destroyed by the fires. Arcenciel is a prominent Lebanese NGO that provides aid for people with disabilities.

“The fire began Monday at 3:00 a.m. and spread uncontrollably. Many residencies burned down. Currently, we’re trying to contain the fire but the strong winds are working against us,” Taher El Mohtar, from Aramoun civil defense, confirmed to Annahar.

Walid Dahouk, an activist from Baakline, told Annahar that some people bought their own water cisterns from Jiyeh and Saida to extinguish the flames. Inhabitants of the burning areas are pleading with the Lebanese authorities to take faster action.

One of the main reasons behind the delay in extinguishing the flames in Mechref is said to be the presence of mines.

“I live in Haret El Nehme near Zaatari and saw the fires from our windows around 12:00 a.m. today. As time passed, mosques began to broadcast about the fire asking people to stay safe and aware. Right now, everything is under control but we’re afraid the fire might reignite soon,” Yassera Hammoud, a resident in Haret El Nehme, told Annahar.

So far, there has been one reported case of death, and the subject is Saleem Abomoujahed, who died from a heart stroke trying to save his house in Debbieh. Hospitals in Chouf are not answering calls, however, two cases of intoxication, three cases of trauma, and one case of injury were reported by Damour Medical Center. Those affected by the fire are showing signs of suffocation, fainting, difficulty breathing, along with minimal burns.

Hotels in Debbieh are offering a free stay for families who fled their burning homes. The Ministry of Health announced that medical treatment will be given within the ministry’s budget.

According to Rawad Taha, the co-founder of Lebanon Weather Forecast, NGO, “such weather cases are common in the fall season by what is called the Red Sea low system, affecting the Levant region.” He noted that this causes extremely speedy winds, and thunderstorms are highly expected in Bekaa until Friday. Lebanese Civil Defense still can’t give information.

Taha also noted that “the temperature reached 37.8 degrees in Beirut yesterday in an all-time record for October, the last record being 37 degrees in October 1998.”

The Lebanese Red Cross is doing its best to handle the situation, and emergency cases can be reported on their hotline: 140.

Fatima Dia contributed to this article