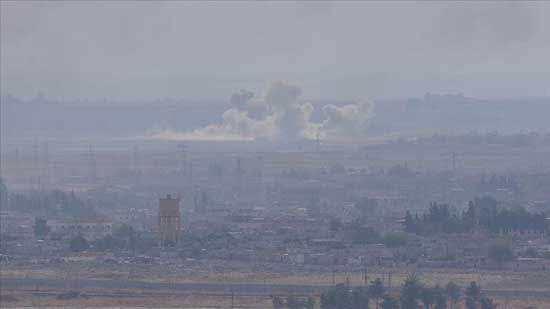 Turkish President Recep Tayyip Erdoğan has vowed to press on with Operation Peace Spring in northeast Syria despite strong international pressure to halt the offensive.

Erdoğan said he would “never declare a ceasefire” on Tuesday after his U.S. counterpart Donald Trump called on Ankara to end the fighting and threatened to “destroy Turkey’s economy” if it did not comply.

A delegation led by the U.S. Vice President, Mike Pence, will arrive in Turkey on Thursday to press for a ceasefire.

Trump on Oct. 6 agreed to pull back troops to make way for Turkey’s cross-border offensive against Kurdish-led groups, but under pressure from Congress hit Turkish ministers and government departments with limited sanctions on Monday.

While separate and far tougher sanctions bills have been introduced to Congress, Turkey is under additional pressure from U.S. prosecutors, who have indicted Turkish state-owned Halkbank over a scheme to break sanctions on Iran.

Meanwhile, U.S. Defense Secretary Mark Esper has said he will press NATO allies to take strong measures against Turkey at a meeting in Brussels next week, and the U.N. Security Council will hold a closed meeting over the operation.

The Turkish operation swiftly drove back the Syrian Democratic Forces (SDF), but the Kurdish-led group has made a deal with the Russian-backed Syrian government to reclaim areas captured by Turkey and allied Syrian rebel fighters.

09:45 Turkey calls on EU to take tougher measures against the PKK

“We reaffirm our expectations from the relevant countries with respect to strengthening the measures taken and displaying maximum consideration to protect our diplomatic and consular missions, the safety of life and property of our citizens and personnel abroad, and to preserve the Turkish interests,” the Turkish Foreign Ministry said in a statement.

Kurdish-led Syrian Democratic Forces have been using a sophisticated network of tunnels built as a contingency against a Turkish invasion and other battlefield tactics to recapture some of the territory seized by Turkish-backed forces, Foreign Policy reported on Wednesday citing four current and former U.S. officials who have worked closely with the group.

The Kurdish fighters “are famous for developing innovative ways to fight a more advanced army,” a senior U.S. administration official told Foreign Policy, adding that “the Turks have been surprised by their effectiveness”.

08:30 Turkey says it has neutralised 637 in the first week of Syria incursion

The Turkish Defence Ministry said on Wednesday that 637 terrorists had been neutralised since the start of Turkey’s military operation in Syria on Oct. 9.

The term neutralise is used by the Turkish government to refer to combatants killed or captured.

U.S. President Donald Trump is set to hold talks at the White House on Wednesday with senior leaders of the Senate and House of Representatives, as a bipartisan group of congressmen prepare to vote on a resolution opposing his decision to withdraw American troops from northeast Syria, Reuters reported.

According to the Turkish news site T24, Erdoğan told Trump that Turkey would not talk to terrorists with regards to the U.S. ceasefire proposal.

Erdoğan told reporters on the way back from the Turkic Council summit in Baku, “Trump said to declare ceasefire. We would never declare a ceasefire.”

Erdoğan continued: “We are, based on the 20-mile proposal, busy cleansing the area that is 444 km long from Iraqi border to the west (side of Syria). Whom? From terrorist organisations. Until we do, ceasefire is not an option. We can never declare ceasefire, because we are establishing a safe zone.”

Erdoğan said, ”They announce sanctions. Our objective is clear: We have absolutely no concern about any sanctions. You know that they are creating some obstacle with regards to visa applications, including myself and three minister friends of mine (who are impacted by this), also some trade sanctions. Apparently they have no idea about the people (they are dealing with). I told all of these to Mr. Trump. On the other hand they are inviting us to the U.S. on November 13.’

The United States has lodged a formal complaint with the Turkish military after the incident through diplomatic channels, Tomlinson said.

23:05- Mike Pence to arrive in Turkey for meeting with Erdoğan on Thursday

The Vice President of the United States, Mike Pence, is set to arrive in Turkey on Thursday for a meeting with President Recep Tayyip Erdoğan, Reuters reported citing the White House.

Pence will urge Turkey to reach an immediate ceasefire in Syria and to work towards a negotiated settlement, it said.

“In Turkey, the VP will voice the United States’ commitment to reach an immediate ceasefire and the conditions for a negotiated settlement,” the White House said in a statement.

The statements arrived as the Russian envoy was speaking to reporters in Abu Dhabi during an official visit there by Russian President Vladimir Putin.

Lavrentiev said that the Turkish military could only cross 5-10kms (3-6 miles) into Syrian territory as per earlier agreements.

U.S. Vice President Mike Pence is set to leave for Turkey within the next 24 hours, AFP reported citing a U.S. official.

The Times of Israel quoted the U.S. Vice President as saying he has been directed to lead a delegation and will pursue a ceasefire and negotiated settlement amid a Turkish offensive targeting Kurdish forces in northeast Syria.

A total of 611members of the SDF and its allies have been killed or captured since the beginning of Turkey’s military offensive in northeast Syria on Oct. 9, the Turkish Defence Ministry said on Tuesday afternoon.

The figure has not been confirmed by the SDF or independently verified.

The Spain Foreign Ministry has announced it will suspend the sale of weapons to be used in the ongoing Operation Peace Spring in northeast Syria, AFP reported.

Spain earlier this week had signalled it was ready for the ban, which France, Germany and Italy have announced.