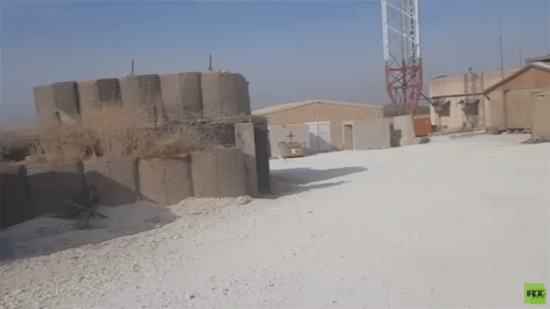 A major US base in northern Syria was destroyed by an air strike after the troops pulled out, likely to prevent more embarrassing videos of the abandoned facility once it is reclaimed by Syrian government troops.

The Lafarge cement factory near Kobani was the site of a joint US-French base, which was abandoned on Wednesday as part of a general withdrawal ordered by US President Donald Trump. Local sources reported the facility at Kharab’Ashaq was bombed shortly thereafter.

US officials confirmed the strike on Wednesday evening, saying it was previously planned and intended “to prevent the coalition operation center from being utilized by outside forces.”

The strike targeted leftover ammunition and vehicles abandoned at the base, the official reportedly said, adding that no coalition troops were harmed.

US-allied Kurdish militias that have controlled the area since liberating it from Islamic State (IS, formerly ISIS) terrorists had previously refused to reintegrate into Syria, backed by Washington’s insistence on regime change in Damascus. With Turkish-backed militants invading from the north, however, they struck an agreement with the Syrian government.

On Tuesday, an RT Arabic crew accompanying the Syrian troops into Manbij filmed a hastily abandoned US base there, complete with food, toys and other supplies scattered about.

Wednesday’s airstrike near Kobani appears to be aimed at avoiding its secrets, whatever they might be, falling into the hands of either the Turks or the Syrian government troops moving in.

Meanwhile, the Turkish invasion, dubbed ‘Operation Peace Spring,’ seems to have stalled in its tracks. Despite the threat of US sanctions and condemnation from other NATO members, Ankara continues to insist on creating a 20-kilometer “safe zone” along the Syrian-Turkish border in the name of disrupting the activities of Kurdish militias, which it has declared terrorists.