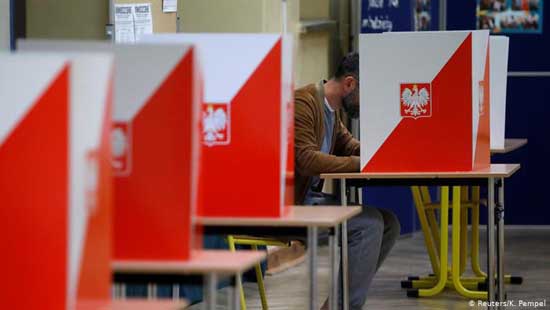 Poland is increasingly becoming an illiberal democracy. The nationalist right-wing Law and Justice party plans to hold onto power by consolidating the media and rejecting foreign influence, says Alexander Görlach.

Poland’s ruling Law and Justice party (PiS) secured a narrow majority in Sunday’s parliamentary election, luring voters with all sorts of promises. But the core party platform has remained nationalist — shown by, among other things, the party’s desire to make the country’s media landscape more Polish. PiS claims the media is controlled by Germany, and says this alleged foreign control should be stopped. The aim, in this former star of Eastern Europe’s post-communist democratic rebirth, is to bring the media into line.

PiS is searching for a foreign scapegoat, due in large part to the fact that Poles remain overwhelmingly positive about Europe. At times, they’ve even topped surveys when it comes to approving of the European Union. Polish and European flags still fly on all public buildings in Warsaw — a rare sight in southern neighbour Hungary.

The Hungarians also went to the polls last weekend, at local level. And for the first time in a decade, Prime Minister Viktor Orban’s ruling Fidesz Party saw defeat in many key races. Like his Polish counterpart, Orban is a proponent of illiberal democracy, the intention of which is to streamline the country’s discourse and to shield it from everything that is supposedly foreign.

The struggle for European unity will continue to be fought in Central Europe, in Poland and Hungary. Those who visit Warsaw find a cosmopolitan metropolis, one in which people don’t give off the impression that they have anything against foreigners. Outside the major cities, however, things look different.

And that difference has something in common with the Brexit vote and Donald Trump’s election win in 2016, according to Stanford professor Francis Fukuyama. It’s not the age, gender, religion or economic situation of the respective voters. As he writes in his latest book, Identity, the common factor is population density.

Where fewer people live in one area, there is a tendency to reject anything foreign and unknown — and they tend to vote accordingly. This was, for example, the case with the nationwide vote against minarets in Switzerland, and it can also be seen in the support for the xenophobic Alternative for Germany party in the less populated regions of eastern Germany, where few foreigners live.

But in the end, such scapegoat policies won’t solve any political problems. Instead, they only raise the question of where these countries are headed once the backers of illiberal democracy have been voted out of office. Hungary has taken a first step in this direction; in Poland, meanwhile, the illiberal trend has been strengthened.

Alexander Görlach is a senior fellow with the Carnegie Council for Ethics in International Affairs and a senior research associate at the Cambridge Institute on Religion & International Studies. He has also held a number of scholarly and advisory positions at Harvard University. He holds doctorate degrees in comparative religion and linguistics and is a guest columnist for several publications, including The New York Times, Swiss daily Neue Zürcher Zeitung and business magazine Wirtschaftswoche.