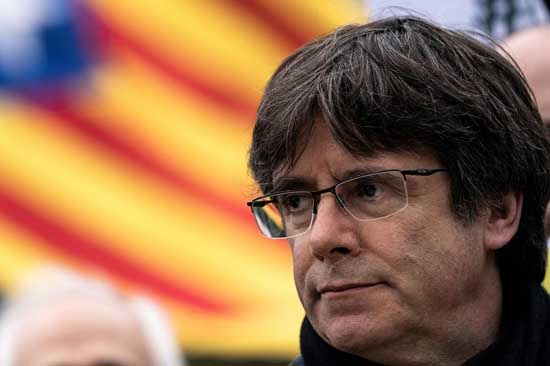 The warrant arrived in Spanish but the law requires that it be sent in one of Belgium’s three national languages or English so Spain will send a new one next week, the spokeswoman said.

“Considering the complexity of the file and the two European arrest warrants previously sent against Mr. Puigdemont, the case will require a thorough judicial analysis,” she added.

Clashes between protesters and police erupted late on Oct. 16 in Barcelona, in a second day of rallies against the jailing of nine Catalan separatists by the Supreme Court.

In unusually tense confrontations, protesters threw cans, stones and flares at riot police, and set garbage containers and cardboard on fire in the middle of several central Barcelona streets, including a thoroughfare housing designer stores and the local stock exchange, according to Reuters witnesses.

Fences were on fire next to La Pedrera, one of Catalan architect Antoni Gaudi’s most famous buildings and one of the city’s main tourist attractions.

In a statement, Spain’s acting government said it will guarantee security in the region, without elaborating further, “A minority is trying to impose violence in the streets of Catalan cities,” the statement said, praising coordination between regional and national police.

Thousands of demonstrators had taken to the streets of the regional capital earlier in the evening. Some lit candles and chanted “Freedom for political prisoners.”

Two years after the debacle of the first plebiscite, Catalonia’s independence drive still dominates much of Spain’s fractured political debate, and will likely colour a national election on Nov. 10, Spain’s fourth in as many years.