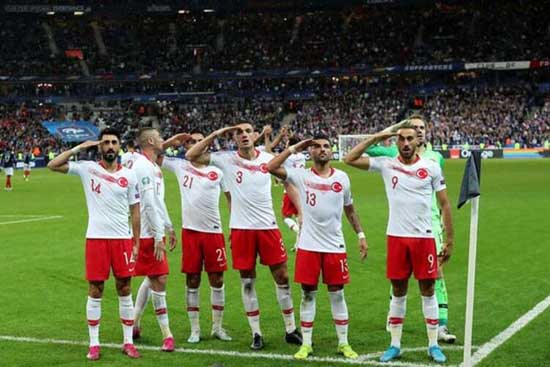 Turkey on Oct. 15 criticized France over a request for UEFA sanctions on the Turkish National Football Team for performing a military salute.

Claiming the salutes at the end of the Oct. 14 match were “contrary to the spirit of sports,” French Sports Minister Roxana Maracineanu tweeted her request that UEFA take action against Turkey.

“l call on UEFA to act sensibly on this investigation request,” Kasapoğlu told a press conference.

After drawing France 1-1 in an away match on Oct. 14 to remain at top of Group H in the UEFA EURO 2020 qualifiers, Turkish players celebrated by saluting in tribute to the Turkish soldiers fighting terrorists in Turkey’s Operation Peace Spring.