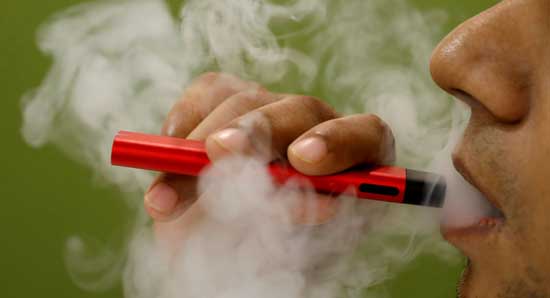 A California Republican congressman who once was caught vaping during a House committee hearing says safety concerns over puffing e-cigarettes are “massively overblown”.

Republican Rep. Duncan Hunter, who is facing federal financial fraud charges, said Monday that he buys his “vape juice” from reputable dealers who aren’t connected to any of the 26 deaths from vaping-related lung diseases nationwide that have been confirmed as of Friday by federal health officials.

“I am vaping,” Hunter, 42, declared to the San Diego Union-Tribune, adding that several state bans are misguided since users are primarily getting sick after using black market THC cartridges.

“It’s because of THC products that are homemade … or using the wrong oils,” Hunter told the newspaper. “It’s bad for you — that’s what’s happening.”

The Centres for Disease Control and Prevention had recently indicated that 76 percent of the 1,299 confirmed and probable lung injury cases associated with vaping involved products containing THC and just 13 percent of those patients involved products that contained only nicotine. Twenty-six deaths have been reported in 21 states, including three in California, CDC data shows.

“The vape stores that I go through have clean rooms,” Hunter told the newspaper. “You know exactly what’s in the vape juice. It’s not made in China, it’s made here in the US by people who know what they’re doing — there’s no bad cases stemming from those types of stores.”

Hunter’s comment comes as almost 1,300 vape-related illnesses have been reported, with at least 26 people dying as a result. Due to the relative inaction of the Food and Drug Administration (FDA), states have begun issuing temporary bans on flavoured, or sometimes all, e-cigarettes, with several bans being battled by e-cigarette manufacturers in state courts.

How to order a healthy takeaway: the best and worst options for dieters revealed

If rich countries don’t share their vaccines, the pandemic could stretch on for years