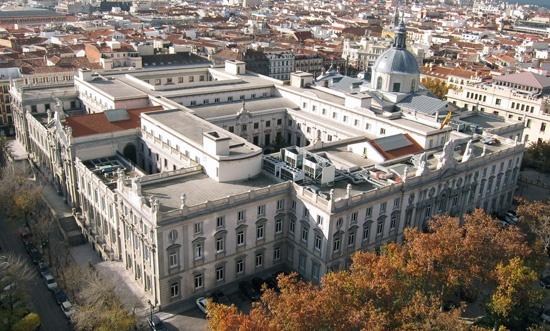 As Catalans are imprisoned for democratic efforts guaranteed by the UN, the EU should be condemned for ignoring an obvious breach of human rights, says Craig Murray.

The vicious jail sentences handed down today by the fascists (I used the word with care and correctly) of the Spanish Supreme Court to the Catalan political prisoners represent a stark symbol of the nadir of liberalism within the EU. That an attempt to organize a democratic vote for the Catalan people in pursuit of the right of self-determination guaranteed in the UN Charter, can lead to such lengthy imprisonment, is a plain abuse of the most basic of human rights.

I was forced to withdraw my lifelong personal support for the EU when, in response to the vicious crushing of the Catalan referendum by Francoist paramilitary forces, when the whole world saw grandmothers hit on the head and thrown down stairs as they attempted to vote, all the institutions of the EU – Council, Commission and Parliament – lined up one after the other to stress their strong support for the Madrid paramilitary action in maintaining “law and order.”

Today we see the same thing. As the Catalans are imprisoned for efforts at democracy, the EU Commission stated that it “respects the position of the Spanish judiciary” and “this is, and remains, an internal matter for Spain, which has to be dealt with in line with its constitutional order.” The commission here is simply ignoring what is very obviously a fundamental breach of basic human rights. This is far worse than anything Poland or Hungary have done in recent years, and the commission is also showing a quite blatant hypocrisy in its relative treatment of its Western and Eastern members.

There was a time when the EU was a shining example of economic and environmental regulation and of regional wealth redistribution. My fondness for the institution dates from it being one of our few defenses from economic Thatcherism. But it has evolved into something very different, a mutual support club for neoliberal political leaders.

I do not much blog about Brexit because I am less concerned about it than the majority of the population. I neither think remaining inside is essential nor that leaving it is a political panacea. I do desperately wish to retain freedom of movement, and believe leaving the customs union would be economic self-harm on a large scale. A Norway style relationship would suit me fine, but by and large I prefer to stay out of the argument. I do believe that, as a matter of democratic legitimacy, having had the 2016 referendum the result should be respected; England should leave and Scotland and Northern Ireland remain.

But I also say this. A million people are expected to march on Saturday in support of the EU. That is the EU which has just expressed its active support for the jailing of Catalans for holding a vote. They join Julian Assange as political prisoners in the EU held for non-violent thought crime.

I say this to anyone thinking of marching on Saturday. It is morally wrong, at this time, to show public support for the EU, unless you balance it by showing your disgust at the fascist repression of the Catalans and the EU’s support for that repression. Every single person going on Saturday’s march has a moral obligation to balance it by sending a message to the EU Commission that their support for this repression is utterly out of order, and carrying a flag or sign on the march indicating support for the Catalan political prisoners. Otherwise you are just a smug person marching for personal self-interest. Alongside the progenitors of the Iraq War, who doubtless will again dominate the platform speeches.