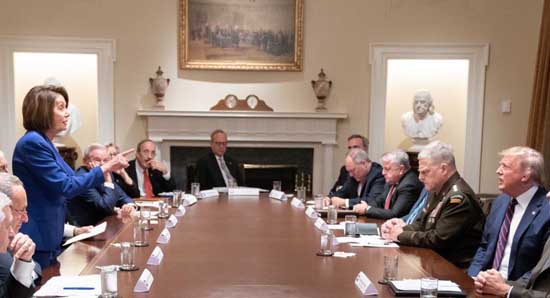 From Capitol Hill to the Twitterverse, US President Donald Trump and House Speaker Nancy Pelosi wasted no time letting the American people know how they really felt about each other’s alleged conduct during their first face-to-face meeting since House Democrats launched an impeachment inquiry.

Moments after their early exit from a White House meeting on Syria, Pelosi and Senate Majority Leader Charles Schumer held a press conference to inform the public that Trump had an outburst in which he called the speaker a “third-rate politician” and made a number of other comments they deemed unacceptable.

“Now, we have to pray for his health – because this was a very serious meltdown on the part of the president,” Pelosi told reporters Wednesday afternoon.

Trump, who, according to NBC News recently spent his 237th day on a golf course since taking office 999 days ago, took the “Do Nothing Democrats” to task by tweeting multiple images from the meeting.

In one image, Trump flipped the script on Pelosi and accused her of having a meltdown and being “unhinged,” which is ironically the title of former Director of Communications for the Office of Public Liaison staffer Omarosa Manigault Newman’s book, in which she detailed her tenure in the Trump administration. Like Pelosi, Omarosa has accused Trump of being mentally unwell, but took it a step further in her book by claiming he may be suffering from dementia or Alzheimer’s, which runs in his family.

Pelosi nonverbally responded to the president’s Twitter barrage by switching her cover photo to the image of her allegedly “unhinged” outburst.

Despite her silence, Trump appeared to have heard her loud and clear, as in a subsequent tweet Wednesday evening he slammed the speaker as “a very sick person” who may have something wrong “upstairs” and is in need of prayer – perhaps mocking Pelosi’s earlier comments on his own mental health.

Netizens, naturally, also joined in on the Twitter tennis match of insults.