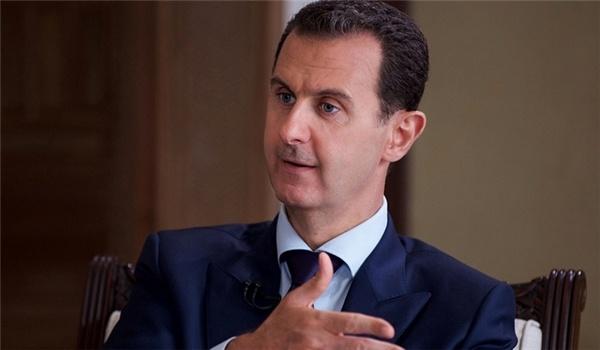 TEHRAN (FNA)- Syrian President Bashar al-Assad said the Damascus government will respond through all legitimate means available to the ongoing Turkish onslaught against the Northern parts of his nation.

During a meeting with visiting Iraqi National Security Advisor Falih al-Fayyadh in Damascus on Thursday, Assad stated that foreign schemes in the Middle East region have been foiled throughout history, and the Turkish criminal aggression, launched by President Recep Tayyip Erdogan’s administration, on Syria falls within such plots, official news agency SANA reported.

“No matter what false slogans could be made up for the Turkish offensive, it is a flagrant invasion and aggression. Syria has frequently hit (Turkish-backed) proxies and terrorists in more than one place. Syria will respond to the assault and confront it anywhere within the Syrian territory through all legitimate means available,” the Syrian leader noted.

Fayyadh, for his part, conveyed Iraqi Prime Minister Adel Abdul-Mahdi’s message, which focused on further expansion of bilateral ties between the two countries in various areas of interest, particularly with regard to combating terrorism and border security in light of the recent developments, economic cooperation and re-opening of border crossings.

Assad’s remarks came after an unknown source in the Syrian Foreign Ministry earlier on Thursday strongly condemned the ongoing ground offensive by Turkish forces and their allied militants against Kurdish regions of the country.

The source stressed, “This treacherous Turkish aggression is the outcome of the expansionist ambitions and illusions of Erdogan’s regime, and it affirms that the regime is classified among terrorist groups to which it has provided all forms of support. The offensive deals a heavy blow to the efforts aimed at finding a solution to the crisis in Syria. It makes, therefore, the Turkish regime lose its position as a guarantor of the Astana peace process as its aggression completely contradicts the principles and decisions of the process.”

The meeting comes after an agreement between Damascus and the Kurds to fend off the assault launched by Ankara and its allied militants on Northeastern Syria last week.

Also on Thursday, US Vice President Mike Pence met Erdogan in Ankara in a hour-and-40-minute meeting on a mission to persuade him to halt the offensive against Kurdish fighters in Northeast Syria.

After the meeting, Pence stated that Turkey has agreed to temporarily halt its military operation against Kurdish militants, allowing them to withdraw from the country’s border.

“Today the United States and Turkey have agreed to a ceasefire in Syria,” Pence said during a joint press conference with US Secretary of State Mike Pompeo.

The ceasefire between the Turkish military backed by affiliated militants and the Kurdish-led fighters is set to last 120 hours, according to Pence.

This time will be spent on the withdrawal of the Kurdish forces from the 20-mile strip along the Syrian border, where Turkey wants to set up a “safe zone”.

The agreed stoppage of hostilities has been described as a “temporary” one.

When a “permanent” one comes in place, US President Donald Trump will cancel the executive sanctions against Ankara, the VP explained.

The process of the Kurdish militias’ withdrawal will be “facilitated” by the US, Pence noted without elaborating.

But in later remarks, Foreign Minister Mevlut Cavusoglu somehow rejected the statements by the US vice-president, and stressed that Turkey has not agreed to any ceasefire or a complete stop of the military offensive, and has only conceded to suspend the ‘Peace Spring’ Operation to monitor the Kurdish militias’ withdrawal.

“Tonight’s agreement is not a ceasefire, since ceasfire takes place between two legal sides and Turkey doesn’t recognize the terrorist groups,” Cavusoglu said.

Yet, Pence said Ankara has promised that the military operation, ‘Peace Spring’, will be stopped entirely when the Kurdish-led militias complete their withdrawal, adding that Washington supports the Turkish idea of creating a “long-term” buffer zone within Syria’s territory.

The Kurds and the Damascus government have yet to respond to the alleged agreement.

The Kurds in Syria previously enjoyed the protection of the US. The protection, however, was de facto withdrawn days ago by Trump, who pulled out American troops that had previously been embedded with the militias.

On Tuesday, Erdogan said he told Trump Ankara would never declare a ceasefire in Northeastern Syria, adding that Turkey would “not negotiate with a terrorist organisation” in response to Trump’s mediation offer.

Trump had signed a decree imposing sanctions on Turkey over its military operation in Syria, threatening Washington will destroy Turkey’s economy if Erdogan refuses to stop Ankara offensive on Kurdish militias.

Larry Kudlow, the White House’s Economic Adviser, stated that Washington is prepared to levy additional sanctions on Turkey if necessary.

“We will use sanctions, and we may use more sanctions to keep Turkey in line,” he told CNBC in an interview.

In response, Cavusoglu said on Wednesday Turkey would retaliate against US sanctions over his country’s military incursion into northeast Syria.

Speaking in parliament, Cavusoglu described all threats and sanctions against Turkey as unacceptable, adding that Ankara expected the US Congress to turn back from its “damaging approach.”

Turkish military forces and Ankara-backed militants launched a long-threatened cross-border invasion of Northeast Syria allegedly to push Kurdish militants away from border areas. It is yet to be seen if Ankara has been honest in its alleged objective of the invasion and will pull back troops to behind the borders If the Kurdish militias pull back as claimed by the US vice-president.