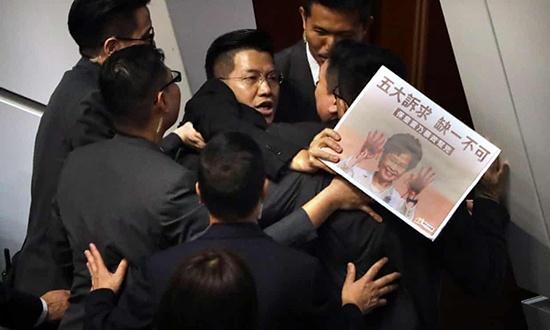 The Hong Kong leader, Carrie Lam, has again been forced from the legislative chamber because of protests by opposition members after a violent attack on a leader of the nearly five-month-old protest movement.

Pro-democracy lawmakers shouted and waved placards depicting Lam with bloodied hands, prompting their removal by guards and the suspension of proceedings.

A day earlier, Lam was forced to abandon an annual policy address in the chamber, later delivering it by television.

Disruption in the chamber and the attack on Wednesday night on Jimmy Sham by assailants wielding hammers and knives marked the latest dramatic turn in the unrest that has rocked the city since June.

Protesters and police have both deployed levels of violence unseen since the former British colony reverted to Chinese rule in 1997.

Before her departure, Lam reiterated that her first priority was ending the violence that had dealt a body blow to the local economy as well as Hong Kong’s reputation as a safe, law-abiding centre for finance and business with a sophisticated independent judiciary.

Lam said she was working with the city’s 180,000 public servants and transport authorities to restore order, although that task was made harder by members of the public sympathetic to the cause of the “rioters”, as she described the protesters.

However, she was forced to withdraw amid calls for her resignation, with the pro-democratic legislator Claudia Mo shouting: “Carrie Lam, you are a liar.”

The protests began in response to a now-withdrawn extradition bill that would have allowed criminal suspects to be sent for trial in Communist party-controlled courts in mainland China.

The movement then ballooned to encompass broader clamours for universal suffrage, an independent inquiry of the policing methods used against protesters and other demands, including ending the description of protesters as rioters.

Sham has been one of the public faces of the protest movement as a leader of the Civil Human Rights Front, which has organised large demonstrations. He was on his way to an evening meeting in Kowloon district when four or five attackers pounced on him, leaving him with bloody head injuries but conscious, the Front said on its Facebook page.

It suggested the assault was politically motivated, linked “to a spreading political terror in order to threaten and inhibit the legitimate exercise of natural and legal rights”.

Mo and other opposition legislators on Thursday suggested the attack on Sham may have been designed to deter others from protesting, or even to help provide a pretext for the government to call off district council elections scheduled for next month.

“We can’t help but feel that this entire thing is part of a plan to shed blood on Hong Kong’s peaceful protests,” Mo was quoted as saying for the government broadcaster RTHK. “If you think you’re being peaceful and you’re safe, you’re not.”

Sham spent the night in hospital and his wounds to the head and arm were not considered life threatening, according to the station.

The assailants escaped in a vehicle and their identities remained unknown, although organised crime elements have long been accused of engineering attacks on protesters and leaders of the pro-democracy camp.

Last month police arrested two people, including a 15-year-old boy, over an assault on Sham and his assistant while they were dining in a cafe. Sham was not injured in that attack.