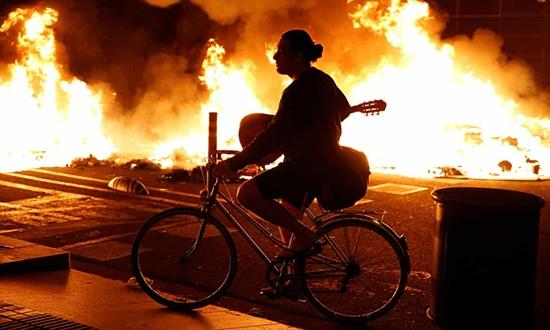 Mass protests continue to rage in Catalonia, as people took to the streets for the fourth consecutive night to condemn harsh prison sentences handed to the pro-independence leaders by the Spain’s Supreme Court.

Protests gripped the Catalan capital on Thursday, continuing the week’s unrest. During the day, striking students hit the streets, and in the evening, crowds of protesters gathered in central Barcelona.

In most places the crowds were peaceful, even turning the demonstration into a giant game of volleyball. However, more hardcore pro-independence protesters soon began erecting barricades in the streets and setting things on fire.

Tensions rose even higher where groups of unionists counter-protesters, some covering their faces or draped in the Spanish flag, began shouting slogans and making Nazi salutes.

There were multiple reports from Catalan sympathizers on social media of nationalist gangs beating up pro-independence demonstrators, some claiming the police were turning a blind eye to the violence.

The unrest, however, has not reached the levels seen on Wednesday night, when some 100 people were injured in clashes between pro-independence activists and police.

According to official figures, some 400 dumpsters were burned on Wednesday alone and the city has already sustained property damage of more than €1 million.

The ongoing protest was sparked by the Spanish Supreme Court’s ruling sentencing nine pro-independence leaders to lengthy jail terms – ranging from nine to 13 years – over their roles in the failed 2017 independence bid.

Furthermore, Spain issued a new European arrest warrant for the former Catalan President Carlos Puigdemont, who managed to slip through Madrid’s hands back in 2017 and is now living in

Catalan regional leader Quim Torra condemned the unrest but called for a new vote for independence within two years in a speech to Parliament on Thursday, promising “We’ll return to the ballot box again on self-determination.”