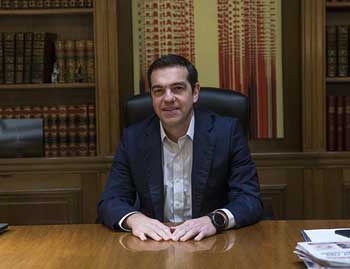 Head of the Greek SYRIZA opposition party Alexis Tsipras on Wednesday urged the European Commission to impose stiff sanctions on Turkey over its hydrocarbon drilling off the coast of Cyprus and to open accession talks with North Macedonia, Greece’s Ekathimerini daily reported.

Meeting with outgoing Commission President Jean-Claude Juncker during a visit to Brussels on Wednesday night, Tsipras called for the activation of sanctions against Turkey that had been discussed at an EU summit in June but also for measures to pressure Ankara into halting operations in Syria.

The former leftist prime minister, who oversaw the landmark name deal signed in June 2018 between Athens and Skopje, also said that green-lighting accession talks with North Macedonia at the two-day summit that begins in Brussels on Thursday is about of “safeguarding the EU’s international credibility.”

Tsipras is in Brussels to attend a meeting of the Party of European Socialists.