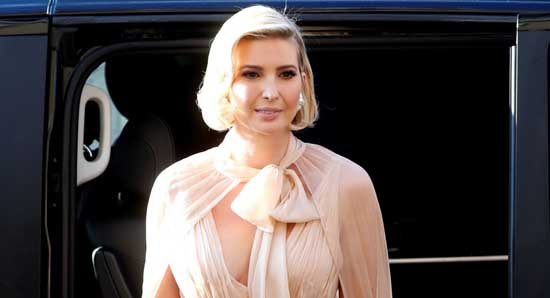 Luxury Brand Louis Vuitton signed the US President Donald Trump’s “pledge to America’s workers” earlier this month that includes a commitment by firms to create a specific number of job “opportunities”; the workshop in Johnson County, Texas, employs 150 people and has an annual payroll of $26 million.

Also in attendance at the launch of the handbag factory were LVMH chairman Bernard Arnault and senior LVMH execs, including Louis Vuitton chairman and CEO Michael Burke.

​This marks the company’s third workshop in the United States; the first two are located in California.

The ensemble’s finishing flourish was something that may have been a bit gauche for a Louis Vuitton party: a large black leather Chanel bag.

The businesswoman and fashion designer shared news of her upcoming arrival on Thursday, tweeting:

Social media fans responded to the news of the luxury brand reaching Texas, with some praising the initiative:

​Many twitter fans opted for a more critical viewpoint:

​Many social media users were puzzled as to who would want LV products that were actually made in the US, and wondered if this would affect the price range:

The location will create 1,000 new jobs over the next several years.

The US represented 25 per cent of the Paris-based company’s global business last year, or more than $10 billion.

The price range of Louis Vuitton bags with the brown and tan initials and icon can start at $400, with luggage costing well into the thousands.

Louis Vuitton is one of 70 brands controlled by LVMH, which also includes Sephora and champagne Moet Hennessy.

LVMH chairman Bernard Arnault, according to Forbes, is the world’s fourth-richest person with a net worth of $100 billion.

How do you know you’ve met your soulmate?