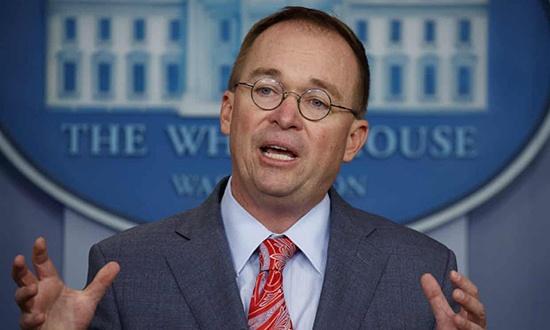 Acting White House chief of staff says politics and foreign policy are mixed ‘all the time’, before walking back remarks

The acting White House chief of staff, Mick Mulvaney, suggested that there was a quid pro quo in relations with Ukraine, only to walk back that statement later in the day.

Mulvaney on Thursday morning said the Trump administration’s decision to withhold millions of dollars in military aid to Ukraine was part of efforts to clean up corruption in the country. He was apparently referring, at least in part, to unsubstantiated conspiracy theories about a purported Ukrainian link to Russia’s hack of the Democratic National Committee (DNC) during the 2016 presidential election.

“The look back to what happened in 2016 certainly was part of the thing that he was worried about in corruption with that nation,” Mulvaney told reporters in the White House briefing room.

“Did he also mention to me in the past the corruption that related to the DNC server? Absolutely, no question about that,” Mulvaney continued. “But that’s it. That’s why we held up the money.”

Mulvaney’s statement contradicted Trump’s repeated denials that his administration had made military aid to Ukraine contingent upon Kyiv’s willingness to open an investigation into the debunked DNC theory and the dealings of Hunter Biden in Ukraine.

“The President’s legal counsel was not involved in acting chief of staff Mick Mulvaney’s press briefing,” it said.

Trump, traveling in Texas, appeared to stand by his top aide, calling Mulvaney a “good man”.

“I have a lot of confidence” in him, Trump said.

Mulvaney himself later claimed in a statement that his comments had been misconstrued.

“Let me be clear, there was absolutely no quid pro quo between Ukrainian military aid and any investigation into the 2016 election,” he said. “The president never told me to withhold any money until the Ukrainians did anything related to the server.

“The only reasons we were holding the money was because of concern about lack of support from other nations and concerns over corruption,” he continued. “There never was any condition on the flow of the aid related to the matter of the DNC server.”

Adam Schiff, the Democratic chair of the House intelligence committee, told reporters on Capitol Hill that Mulvaney’s remarks made the impeachment situation “much, much worse”.

Schiff would not comment on whether he would bring Mulvaney in for a deposition, but the House committees investigating impeachment have already requested documents from the acting White House chief of staff.

Mulvaney’s comments were just one of several major developments in Washington on Thursday. Shortly after the press briefing, news broke that the energy secretary, Rick Perry, whose involvement in the Ukraine phone call has come under scrutiny, had informed Trump that he was resigning.

Though Perry’s resignation was long expected, the news of his involvement with Ukraine likely added pressure to the decision. Perry told the Wall Street Journal on Wednesday that he spoke to Trump’s personal lawyer Rudy Giuliani at Trump’s direction about Ukraine-related matters.

Trump told reporters he has a replacement for Perry lined up.

Also on Thursday, the US ambassador to the European Union testified before Congress. Gordon Sondland said Trump had instructed US diplomats to go through his personal lawyer to make the Ukrainian president’s access to the White House dependent on launching investigations into Trump’s political opponents.

In his opening statement to Congress, Sondland said he had been “disappointed” Trump had chosen to conduct an important strategic relationship through Rudy Giuliani and only realized later that the aim of the investigations Trump was demanding was to target the Democratic party and Joe Biden.

The ambassador was the latest in a series of witnesses, many of them career state department and foreign policy officials, providing new and detailed concerns about Trump and Giuliani and their attempts to influence Ukraine.