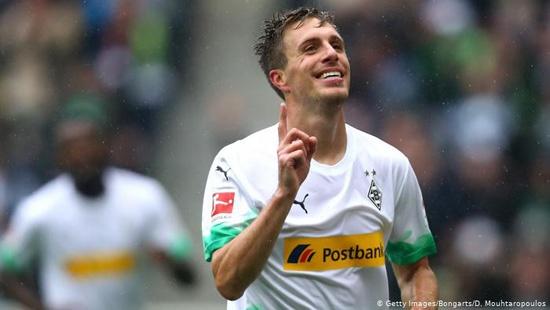 Borussia Mönchengladbach head into their match in Dortmund as the surprise Bundesliga leaders. Forward Patrick Herrmann spoke to DW about the Foals’ recipe for success and their chances of victory on Saturday.

DW: Patrick Herrmann, you have been playing at Gladbach since the club brought you into their youth system in 2008. You know this club like the back of your hand. Is this the best Borussia team you’ve ever been part of?

Patrick Herrmann: That’s hard to say. We also did well back when we had Dante, (Roman) Neustädter, (Marco) Reus and (Marc-Andre) ter Stegen in our team. But I think we’re on the right track.

How has the team managed to climb to the top of the standings for the first time since 2011?

Take the match against Düsseldorf, for example, when we went down 1-0. We believed in ourselves, ratcheted up the pressure in the second half, and turned the game around. Those are big points, when you fall behind but still come out with all three in the end. Also on the last matchday against Augsburg, we played a great game and fully deserved the win [5-1].

General manager Max Eberl has spoken of a “new Borussia feeling.” What did he mean by that?

It’s a feeling that you have to have on the pitch. We’re playing a high press at the moment. That’s what the new coach Marco Rose has taught us. Against Augsburg, we executed it almost perfectly in the first half: applying high pressure, winning balls up front and creating scoring chances. That’s how we scored the first three goals.

That was a special game for you, too.

No question about it. If you’re in the starting lineup and score two goals in a Bundesliga game for the first time since 2015, it’s just a great feeling.

What is the team doing differently in terms of tactics compared to last season?

Last year we played more of a destabilization and let the ball run, which was sometimes seemed a bit dry for the fans. You could tell that from the mood – even though this was our tactics and we implemented it well. Now we look to go forward more, playing fast balls deep in order to create a lot of chances. This is more my game, and I think it’s also very attractive for the fans.

Have the team set off a new wave of euphoria in Mönchengladbach?

With the fans behind us, we’ve managed to create a special atmosphere this season, beginning on the very first matchday. Everyone knows that this can be a really good season if we all believe in ourselves – not just us on the pitch, but everyone else behind the scenes. That wasn’t always the case last season. Now the fans are with us for a thousand percent of every game, not just one hundred percent.

What’s been the reaction of the fans?

If you’re first in the standings, of course there’s a bit more of that. We can enjoy it, just as the fans can. But of course we know that it’s just a moment in time, which can change very quickly.

What do you expect from Saturday’s match against the other Borussia in Dortmund?

BVB are always hard to play against, especially in Dortmund. They have a lot of pacey players and are especially strong on offense. They are one of the best teams in Germany, and it will be extremely difficult. I can recall games that we narrowly won there, but we’ve also had our backsides handed to us. They have tremendous qualities, but of course, we will try to take something from that game.

You will also be facing Lucien Favre on Saturday. What is it like for a player to face his old coach?

It’s not just Lucien Favre. You look forward to seeing old acquaintances, whether it’s the coach or players like Marco Reus, Thorgan Hazard or Mo Dahoud. But during the match itself you’re all business.

Who has been your best coach so far in Mönchengladbach?

It’s a difficult question. Every coach had something that made him special. Lucien Favre, for example, was crazy about tactics, a perfectionist. Sometimes he wanted you to do things that weren’t even possible. Marco Rose, on the other hand, is a coach who places a great emphasis on counter-pressing. This benefits me, because that’s how I like to play myself.

Patrick Herrmann joined Borussia Mönchengladbach as a 17-year-old in 2008. He made his Bundesliga debut against Gladbach’s Rhineland rivals Cologne in 2010. Heading into Saturday’s match in Dortmund, the 28-year-old has 249 Bundesliga appearances and 42 goals to his name. He has also made two appearances for the German national team.

The interview was conducted by Christian Schreder

Champions League final to be moved from İstanbul to Germany or Portugal: report