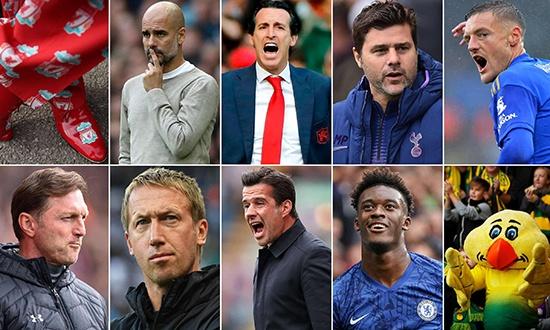 A crunch clash at Old Trafford, Palace tackle vulnerable champions and could West Ham do for Marco Silva?

1) Time for Liverpool to turn the screw

The last time Liverpool visited Old Trafford, they met a United side struggling with injuries – even before three players were forced off during the first half. But, though Liverpool were three points clear at the top, they played as though the goalless draw they eventually achieved was an acceptable result. In the event, Manchester City pipped them to the title by a point, and though that required a phenomenal run of 14 straight wins, had Liverpool embraced the pressure and played with their usual intensity in that game they would now be champions of England, not into their 30th season without a league title. On Sunday, Liverpool will arrive able to wear and excuse any slip-up: they are eight points clear at the top, while United, who are not quite as abhorrently awful as they’ve looked recently, will have some key players back from injury and should be up for the fight. Even so, Liverpool would be foolish to entertain those thoughts. They have one foot on City’s throat and the other aimed at United’s solar plexus; allowing them to escape instead of kicking them when they’re down would be a significant oversight with potentially significant repercussions. Playing safe is not always the safe option. DH

If there is a state-of-the-art crisis klaxon in Tottenham’s stadium, it is likely to be sounded for the first time should the Premier League’s bottom side consign Spurs to their third defeat in as many games. Having shipped a combined 10 goals in two games against Bayern and Brighton, Tottenham are unlikely to approach this game with confidence, but the international break will at least have provided the majority of their players with a change of scenery in which to try to rid themselves of the ennui permeating their Enfield training HQ. Despite reports that he was distinctly unimpressed with summer transfer dealings, Mauricio Pochettino has said he does not expect any January signings because “I believe in the players we have”. All available evidence suggests his players currently have little or no belief in themselves. A home defeat would likely prompt fury in the stands, albeit among a fanbase who seem as yet undecided in whose direction exactly their ire should be aimed. BG

3) Silva’s job on the line against Hammers?

Marco Silva survived the international break but should Everton lose to West Ham there is a chance he may not survive beyond the weekend. The situation is that critical for the Portuguese, following four straight league defeats which has put his side in the relegation zone before Saturday’s game. The omens are not good either. Two years ago, Ronald Koeman was sacked after Everton lost to a team from London in October; Arsenal were the visitors, 5-2 the final score, and given Everton’s defensive travails right now – particularly at set pieces – who is to say they will not concede as many this weekend? Silva needs to tighten up his side and change it. The 4-2-3-1 formation he stubbornly sticks to is not working while certain players, most notably Gylfi Sigurdsson, have been performing poorly for some time. What’s for sure is that a failure to improve and adapt will cost Silva and, if he’s not careful, could do so very soon. SN

Crystal Palace have made a brilliant start to the season, and could scarcely be better placed for the visit of the champions. Manchester City, on the other hand, have not looked as vulnerable in quite some time, and Roy Hodgson will seek to exploit that. Most likely, he will ask Wilfried Zaha and Jordan Ayew to rove in the spaces between City’s full-backs and centre-backs – such as there are – and, if their teammates can get them the ball, Palace are in the game. Pep Guardiola clearly doesn’t fancy John Stones – and with fair reason – but he must now rely on him, while Nicolás Otamendi remains a liability. However – and it really is an enormous however – Stones’s return from injury means Fernandinho is no longer required at the back, and with Kevin De Bruyne also fit again, City have a full complement of midfielders. Hodgson cannot simply plan his team’s route to goal but must somehow fathom how they avoid being taken apart. One job is significantly easier than the other. DH

5) Will Leicester sustain their strong start?

Football365 recently published an article that broke down the attacking numbers surrounding Leicester’s very good start to the season and hypothesised that they are quite simply unsustainable. For instance, Jamie Vardy’s five goals have come from seven shots on target, while the four Ricardo Pereira and Wilfred Ndidi have scored between them have come from four shots on target. So a drop off is coming. There was the loss at Liverpool before the international break and now a game against a Burnley side whose own decent start has gone under the radar somewhat. Sean Dyche’s side are seventh, having won two of their past three games and lost only once away from home. They won’t be pushovers at the King Power and could stifle a Leicester side who, if the stats are anything to go by, are playing at a level that is remarkable in more ways than one. SN

6) Brighton must build on lightbulb moment

Brighton have never won at Villa Park, but will fancy their chances of breaking that duck at the 12th time of asking. Graham Potter’s side went into the international break on the back of a 3-0 dismantling of Tottenham that had all the hallmarks of a lightbulb moment; a game in which their players put into practice to devastating effect the possession-based philosophy their erudite manager has been preaching. With a run of winnable games against Villa, Everton, Norwich and Manchester United to come, they must show their performance against Spurs was no one-off. But, following the slaughter they visited upon Norwich at Carrow Road, Villa should provide a stern test. BG

7) Hudson-Odoi can be the key for Chelsea

After difficult starts to the season, neither manager will have welcomed the international break. Frank Lampard had Frank Lampard’s Chelsea playing with freedom and zest, while Steve Bruce had finally copied Rafael Benítez, thereby restoring Newcastle’s discipline and intensity. However, it is not hard to predict the flow of this game: Newcastle will invite Chelsea on to them and hope to nick a goal, while Chelsea will look to pick holes in their back line, making the match an interesting test for Callum Hudson-Odoi. Lots of wingers are adept at running in behind, but the better the team they play for the less opportunity they have to do it, because opposing defences tend to occupy that space. What counts is the ability to pinch a yard from a standing start, pick clever passes that change the angle of attack, and sneak poacher’s goals at the back post. If Hudson-Odoi can marry these attributes to his preternatural skill, balance and composure, Chelsea have a star on their hands. DH

8) Does the table mask shortcomings under Emery?

Come Monday night it is possible Arsenal will be second. Victory over Sheffield United combined with City’s failure to win at Palace on Saturday would secure that outcome and leave Unai Emery no doubt feeling satisfied. But while Arsenal’s results have been good, the majority of their performances have not and should they be unconvincing again at Bramall Lane, regardless of the result, it will leave a question mark hanging over the Spaniard’s long-term credentials. Right now Emery seems like a man unsure whether to stick to his conservative principles or twist and let his team’s attacking riches flourish. A shift to something more decisive, and specifically to the latter, could be the thing that shows he knows what he is doing. SN

The Southampton jury remains out on Ralph Hasenhüttl, who takes his side to the Black Country to face Wolves . While not being Mark Hughes is a tick on the credit side of the Austrian’s ledger, it will only get him so far. His team have lost three consecutive Premier League matches against middling-to-decent opposition and failed to beat anyone of major significance since Spurs at the beginning of March. Hasenhüttl claims not having too many of his players away on international duty has benefited his team. “It gave me the chance to work on a few weaknesses in our game that we have seen in our last two games,” he announced. With his team averaging less than a point a game and tough assignments to come against Leicester and Manchester City next, his players urgently need to show they have taken his pointers on board. BG

10) Worries for Norwich as memory fades

Norwich’s win over Manchester City – and the manner of it – made for the most inspirational 90 minutes of the season so far. But subsequent to it, Norwich were beaten by Burnley and Crystal Palace, then walloped by Aston Villa. Now sitting second-bottom, they need points as a matter of urgency. In a way, Bournemouth are ideal next opponents: their desire to play will permit Norwich to do likewise, but wins over Everton and Southampton followed by a creditable defeat at Arsenal show the Cherries are also in form. Their front four of Harry Wilson, Callum Wilson, Dominic Solanke and Josh King pose a stern threat to any defence, but the power and intelligence of their press mean Norwich must take more care than most. Playing out from the back against City’s diminutive technicians is one thing, but – however silly this may sound ­– doing likewise against Bournemouth is something else entirely. DH