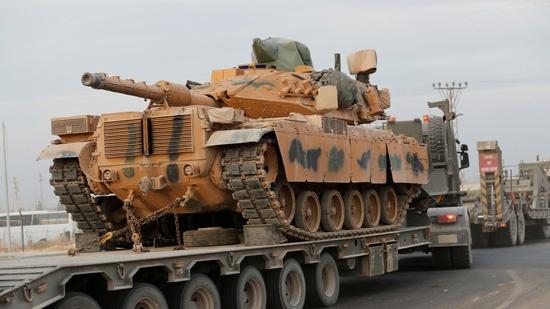 Turkey has agreed to temporarily halt its military operation against Syria’s Kurdish-led militias, allowing them to withdraw from the country’s border, US Vice President Mike Pence said during a visit to Ankara.

There, the American delegation held talks with the Turkish leader Recep Tayyip Erdogan – a visit that comes at a time of heightened tensions between the two NATO allies.

“Today the United States and Turkey have agreed to a ceasefire in Syria,” Pence announced during a joint press conference with US Secretary of State Mike Pompeo.

The ceasefire between the Turkish military backed by affiliated militants and the Kurdish-led fighters is set to last 120 hours. This time will be spent on the withdrawal of the Kurdish forces from the 20-mile (32 kilometer) strip along the Syrian border, where Turkey wants to set up a “safe zone.”

According to a text of the agreement, Ankara promised that the military operation, dubbed ‘Peace Spring’, will be “halted upon completion of this withdrawal.”  The “safe zone” in question, the text says, “will be primarily enforced by the Turkish Armed Forces.”

During the 120-hour period no further sanctions – triggered by the Turkish incursion – will be imposed on Ankara. When the ceasefire becomes a “permanent” one, Washington will cancel the executive restrictions against Turkey, Pence explained.

The US President Donald Trump, for his part, stated that the sanctions were no longer necessary after the deal had been agreed upon. Hailing the “amazing” outcome of the negotiations,Trump also said that it required a “tough love” to get the deal done.

Meanwhile, the US and Turkish sides managed to produce some conflicting accounts of the meeting. While Pence insisted Ankara promised to not attack the Syrian border town of Kobani, Turkey’s FM later said no such commitments were made.

Apart from that, the town – as well as several other locations close to the country’s border – was already entered by Syria’s Army, according to state media. Last weekend, Damascus seemingly reached a deal with the Kurds and vowed to protect its soil from “Turkish aggression.” Therefore, it remains unclear whether Ankara will actually press forward with occupying all of its envisioned “safe zone.”

‘Peace Spring’ kicked off last Wednesday, targeting the northeastern parts of Syria controlled by the Kurdish-led militias – namely the so-called Syria Democratic Forces (SDF) group. While the SDF used to be the key US ally in its fight against Islamic State (IS, formerly ISIS), Ankara regards the group as an offshoot of the outlawed Kurdistan Workers’ Party (PKK).

The PKK, listed as a terrorist organization by both Ankara and Washington, has been waging a low-intensity insurgence in Turkey’s southeast for decades.The operation – repeatedly mulled for months – began just two days after Trump announced his decision to pull American troops from Syria’s northeast. The move caused an uproar in Washington and was branded a betrayal of the Kurds. As the ‘Peace Spring’ gained momentum, further US servicemen were pulled out of the combat zone.

Ankara’s offensive drew widespread international condemnation and already resulted in a number of countries suspending arms exports to Turkey. Facing mounting criticism, the US president himself insisted that he had not endorsed the operation by any means, and repeatedly threatened Turkey with “devastating” sanctions, as well as executively implementing a set of restrictions against it. Ankara fired b ack, saying it will not yield down to any pressure and that it has bee targetiong “terrorists.”