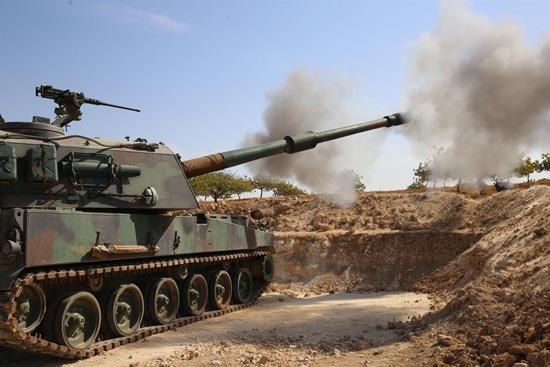 Turkish army hits terror targets with howitzers in the rural area of Ras al-Ain district in northern Syria, as part of the ongoing counterterrorism operation in the region.

Within the scope of operation, the Turkish army and the Syrian National Army (SNA) continue to move towards Tal Abyad‘s southern and western parts.

The YPG/PKK terrorist group’s human rights violation in northern Syria forced at least 50,000 people to flee the Tal Abyad district and its surrounding villages since mid-2015.

Local people of Tal Abyad have continued to return to their hometown that was cleared of terrorists by the Turkish army and SNA.

The cleared areas have been searched by the security forces for civilians’ safety.

Turkish President Recep Tayyip Erdoğan said on Oct. 16 that a total of 1,220 square kilometers have been cleared of terrorist groups in Syria’s north.

A large number of weapon emplacements, shelters and caves were destroyed by the Turkish forces in the operations, the ministry said in a statement.

“Operation Peace Spring,” now in its eighth day on Oct. 17, aims to eliminate terrorists from Turkey’s borders and provide the safe return of Syrian.

A total of 673 YPG/PKK terrorists have been “neutralized” since the launch of Turkey’s ongoing anti-terror operation, the National Defense Ministry said on Oct. 17.

Turkey’s anti-terror operation has liberated two districts, one town and tens of villages from YPG/PKK terrorists in the first seven days.

The districts of Tal Abyad and Ras al-Ain, the town of Suluk and several villages were cleared of terrorists.

Turkey-backed Syrian National Army (SNA) is combing the liberated villages to ensure the safety of civilians.

SNA troops on search and patrol duties also removed so-called flags of the terrorist group in the village of Tal Half in the Ras al-Ain district.

The operation is ongoing in the countryside of Tal Abyad and Ras al-Ayn districts.

“Tal Abyad and Ras al-Ain are under control, our efforts regarding safety in the region continue,” Akar said on Oct. 14.

The town center of Tal Abyad district was cleared of YPG/PKK terrorists on Oct. 13.

On the same day, the village of Suluk in southeastern Tal Abyad was cleared of YPG/PKK terrorist organization.

A drone belonging to the YPG/PKK terror group was downed on Oct. 16 in Ras al-Ain.

Additionally, a Grad missile launcher and anti-tank missiles were also seized, as part of the ongoing operations in the region.