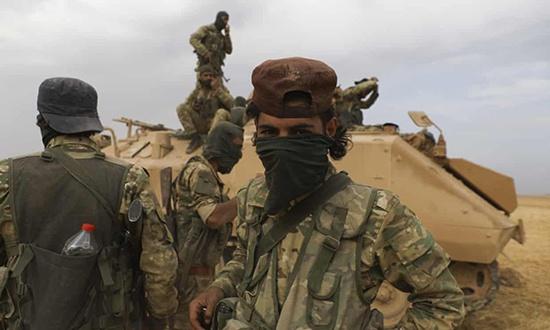 Recep Tayyip Erdoğan, the Turkish president, has said his country would “crush the heads” of Kurdish militants if they did not withdraw from a planned “safe zone” in northern Syria in time.

Speaking at an opening ceremony in the central Turkish province of Kayseri, Erdoğan said he would discuss the deployment of Syrian government forces in the safe zone during talks with Russia’s president, Vladimir Putin, next week, but warned Ankara would “implement its own plans” if a solution was not reached.

Following an intervention from the US, Turkey agreed on Thursday to pause its military offensive in north-eastern Syria for five days while Kurdish fighters withdrew from the safe zone.

Reports of Kurdish evacuation plans started to emerge on Saturday, with the Associated Press quoting senior Syrian Democratic Forces (SDF) official Redur Khalil as saying it planned to evacuate the town of Ras al-Ayn on Sunday. He said only after that would his forces pull back from a 120-km (75-mile) stretch between the towns of Ras al-Ayn and Tal-Aybad. He said he would also withdraw 30km (19 miles) from the border.

It is the first time Kurdish forces have publicly acknowledged they will withdraw from the border, saying they had coordinated it with the Americans. The agreement has not specified the area of its pullback.

Earlier on Saturday, both Turkish and Kurdish sides blamed each other for fighting that has rattled the US-brokered ceasefire.

Turkish-backed Syrian fighters clashed with Kurdish-led forces in several parts of north-eastern Syria on Saturday, with some crossing the border from Turkey to attack a village, a war monitor said.

Turkey’s defence ministry said it was “completely abiding” by the accord and that it was in “instantaneous coordination” with Washington to ensure the continuity of calm. The ministry accused Kurdish-led fighters of carrying out 14 “attacks and harassments” in the past 36 hours, mostly in Ras al-Ayn, which was besieged by allied fighters before the ceasefire. It said Syrian-Kurdish fighters used mortars, rockets, anti-aircraft and anti-tank heavy machine guns.

The US, meanwhile, confirmed that the withdrawal of nearly 1,000 of its troops would continue, with personnel pulled out of Syria to be redeployed in western Iraq

En route to the Middle East on Saturday, the US defence secretary, Mark Esper, said: “The US withdrawal continues apace from north-eastern Syria … we’re talking weeks not days. The current game plan is for those forces to reposition into western Iraq.”

Turkey also said it had recaptured 41 suspected Isis members who had fled a detention camp amid the chaos caused by the fighting earlier this week.

The Kurds, meanwhile, appealed to the US vice-president, Mike Pence, to enforce the deal saying Turkey has failed to abide by its provisions and has continued the siege of Ras al-Ayn.

The SDF said there were still clashes inside Ras al-Ayn and medical personnel could not enter to help the wounded.

The Britain-based Syrian Observatory for Human Rights said the Turkish-backed fighters entered Syria and advanced into Kurdish-held Shakariya, a village east of Ras al-Ayn where there were clashes and a Turkish strike a day earlier.

Video posted online showed the fighters driving alongside the wall Turkey has erected along the border and boasting that they were headed on “an assault” into Syria. The video did not show them crossing the border.

Syrian state media said Turkish-backed fighters also made an “infiltration attempt” south of Ras al-Ayn but were repelled in clashes with the Syrian government military that had just moved into the area. The reports gave no further details.

The agreement – reached after negotiations between Erdoğan andPence – would virtually hand Turkey its aims in the invasion, requiring Kurdish fighters to vacate a swath of territory in Syria along the Turkish border during the ceasefire.

The Kurdish-led force, which said it was in contact with the Americans during the negotiations, said it would abide by the ceasefire but has not committed to any pull-out. Erdoğan warned on Friday that Turkey will relaunch its assault on Tuesday when the deal runs out if the Kurdish fighters do not pull out of a zone 30km (20-miles) deep running the entire length of the border.

On Saturday, the Turkish interior minister, Süleyman Soylu, said 41 suspected Isis members were recaptured after fleeing a detention camp amid fighting earlier this week in Syria. He said 195 further suspected Isis members had been recaptured, adding that they would be relocated to areas controlled by Turkey in northern Syria, including Afrin and al-Bab.

It was reported last week that after a Turkish shell landed near Ain Issa camp that holds members of Isis families, more than 700 managed to flee amid the chaos.

Erdoğan has accused Syrian Kurdish forces of releasing 750 Isis members and families, amid Turkey’s offensive. The Kurds say they broke out of their camp a week ago, attacking guards, amid heavy clashes and Turkish airstrikes nearby.