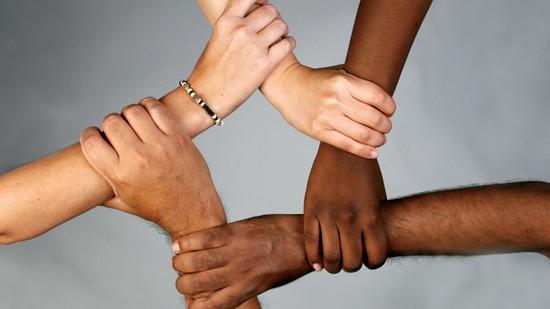 The Guardian’s latest piece on modern schoolchildren trying to make sense of 20th-century tech is indicative of the times in more ways than one. None of the kids can use a rotary phone – and none of them are white, either.

The Guardian has published a feel-good article describing how modern-day 15-year-olds try to complete everyday tasks using old-timey equipment (actually, it’s not even all that old-timey, it was mostly still widely in use in the 1990s). It’s a tried and trusted trope – Youtube is full of ‘modern teens react’ videos – that stokes older readers’ nostalgia, employed in a light-hearted manner, with kids even given grades for their (lack of) success in adapting to old tech.

But there’s a subtler aspect to it as well. Intentionally or not, none of the six “kids these days” fumbling around with clunky old phones and cassette players in the Guardian’s pictures are white.

It’s not a piece about race, or inclusivity. That aspect isn’t even touched upon. It, presumably, doesn’t need to be – the goal has been achieved, inclusivity is now part of the mindset. Just look at all the different-race kids and… why do I have this feeling that we excluded someone?

Don’t get me wrong. It’s awesome that media coverage is reflective of reality, and that non-white people, including children, are no longer seen as an oddity, shunned or sidelined. But how do we go about that without shunning and sidelining white ones?

“Move aside whitey, you’ve had your time in the spotlight” isn’t inclusivitiy. Inclusivity is a diverse cast of kids having fun with the old gadgets together. Imagine if all the children in the pictures were white? That wouldn’t be very inclusive either.

Then again, this is the same Guardian whose writers took turns telling off a four-year-old child in a Mississippi restaurant for his “white supremacy.” To borrow a phrase beloved by Guardian writers, any situation can be bent into a ‘teachable moment;’ an opportunity to spread the gospel of diversity.

A conspiracy theorist would mutter about “subtle propaganda” and “indoctrination,” but that propaganda would be unnecessary. Britain’s demographics are changing, and the majority-white school is already going the way of the rotary phone.

The school in question, Loxford Academy, is situated in the London borough of Redbridge, which has seen its white British population fall from 57 percent in 2001 to 35 percent in 2011. Meanwhile, the borough’s Asian and Asian-British population increased from 26 to 42 percent in that same time. So pronounced has been the demographic shift in the area that middle-aged, British-born Asian residents of Redbridge told academic researchers in 2012 that they missed the older, more diverse Redbridge they grew up in – diversity here meaning more white people.

So, was the Guardian’s decision to exclude white children a deliberate choice, an unintentional blunder, or a simple oversight? Who knows. But in an era when we often hear the phrase “diversity is our strength,” its writers would do well to remember that white kids are still a part of that diversity.